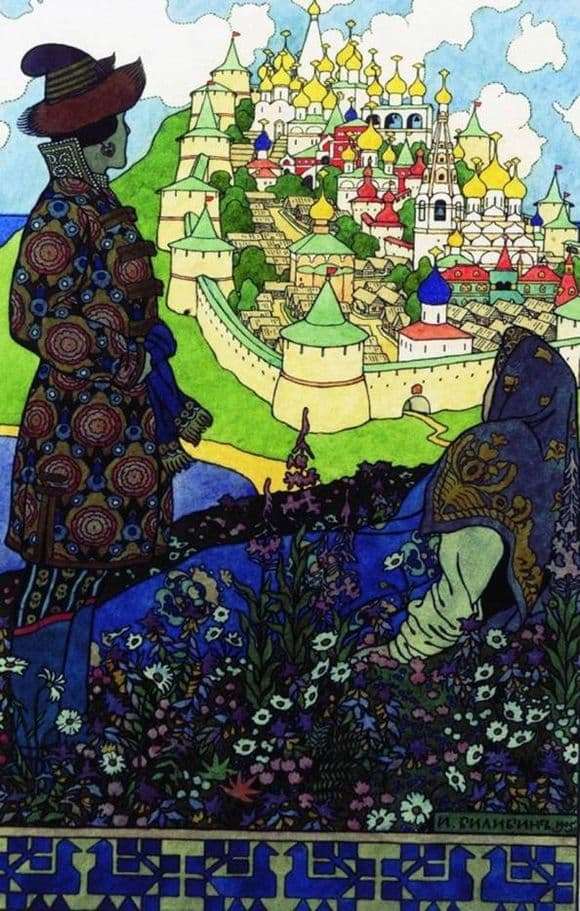 Ivan Bilibin subtly felt the distinctive character and bright temper of the people of ancient Russia and knew how to convey it in his paintings. Looking at the illustrations of this remarkable artist at first glance it is impossible to perceive the whole holistic depth of his works. Only with the most detailed consideration of the viewer, new images and additional details are revealed.

Bilibin believed that his main creative task was to embody the idea of nationalism and the history of the people, going back to the distant past. Therefore, the artist with interest took up the illustration of Pushkin’s fairy tale about the glorious Tsar Saltan.

In the image, the viewer sees the scene when the young prince Guidon and his mother from the hill contemplate the splendor of the city, which lies below. The golden domes of churches and the bright roofs of other houses sparkle under the rays of the sun on a fine day. Protection for the beautiful city is a strong wall with high towers, enveloping it from all sides.

The illustration shows that the weather is quiet and clear. Lush green grass covers the hills. White-colored clouds float across the pale blue sky.

The main characters of the picture, brought to the fore, are not illuminated by the sun – they are in the shadow. The marvelous hill on which they sit is covered with many bright wildflowers. The queen, the mother of Guidon, lies on the earth in all this flourishing splendor. She is wearing a blue dress and a scarf, painted with rich patterns. The young prince stands in a half turn. He fixed his thoughtful gaze on the white-stone city in the distance. His dark caftan with an intricate red ornament girdles a blue sash.

Artist Ivan Bilibin masterfully depicted the folk clothing of those times. His illustrations allow the viewer to feel the spirit of the old Russian life and feel like a part of it.