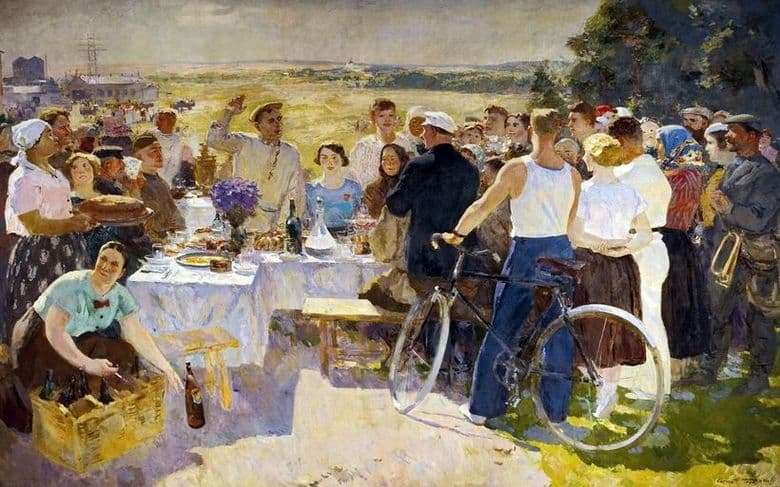 Soviet art of the 1930s ceases to be loaded with details. The painters of that time tried to reflect the fast course of life as accurately as possible.

S. V. Gerasimov was able to convey the whole atmosphere of the collective farm through his painting “Collective Farm Holiday”, which he wrote in 1937

For the first time, the canvas was presented to the Soviet people in 1938, at an exhibition dedicated to the socialist industry. The canvas itself is more like a colorful celebration, which is woven from several single pieces. The picture immediately became the focus of disputes and scandals – why not everything is clear, and… why everything is so detailed! Some tried to immediately blame the painter that he did not open up the topic very deeply. Someone reproached him for having devoted too much time to drawing the details of the landscape. It took quite a long time until the painting “Collective Farm Holiday” managed to take its deserved place among the best paintings of the period of the Soviet Union.

Gerasimov, in his characteristic manner, was able to show all the processes that took place in the 30s. We do not see a single person in the picture who would smile. Quite possibly, this is not a holiday, but some kind of event. The artist tried to arrange the people portrayed by him on the hill. Thus he was able to show us the panorama that is viewed from above.

Gerasimov is a painter who closely took the people, his future, present and past to his heart. His art is bright paintings that are not afraid to show modern life, culture.