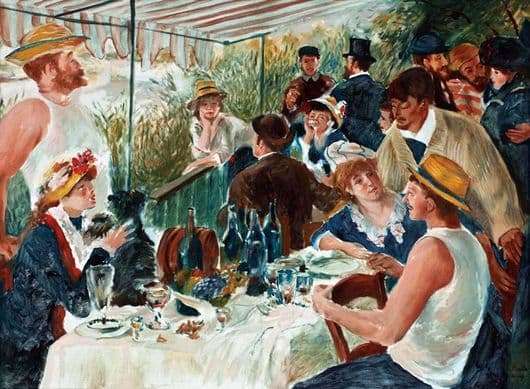 The painting depicts Parisians vacationing outside the city. The action was captured in the town of Shatu, where rowing lovers were just gathering. People settled under a canopy on the terrace of the Fournaise restaurant. The picture was created within a few months. Each of the characters depicted Renoir invited to pose separately. The result was a large group portrait. So, in the foreground on the left is Alina Sherigo, the beloved of the artist. She is young and carefree.

The girl pulls the little dog in her hands. Behind her, leaning on the railing, is a man. This is none other than Renoir himself. He is wearing a white sleeveless shirt and a straw hat. Here he is strong and confident. In the same shirt depicts a young man on the right, sitting astride a chair. In his right hand he holds a cigarette. This is an amateur artist and collector Kaybott. It can be seen that men are ready to row. On the table a lot of fruit, a few bottles of wine, plates and glasses. The wine is already open and partially drunk. In the glasses pinkish its remnants.

The artist skillfully added glare, making the glass sparkle in the sun. At the central table sits another girl in a blue dress. She attentively listens to the interlocutor. A young man approached her. This is an Italian journalist, Maggiolo. At the central table there is another restaurant table, at which people sit. In the background, two men are talking about something. Next to them against the background of thick greenery is a lovely girl in a straw hat. She leaned on the railing, supporting her head with her right hand. This is Alfonsina Fournaise, the daughter of a restaurant owner.

In the distance, the river Seine and sailboats are visible. In the background on the right, two men are talking to a girl who straightens her hat. In general, the picture was light, sunny, filled with paints. Heroes froze as if in random natural postures. It creates a feeling of relaxation with its relaxed atmosphere.