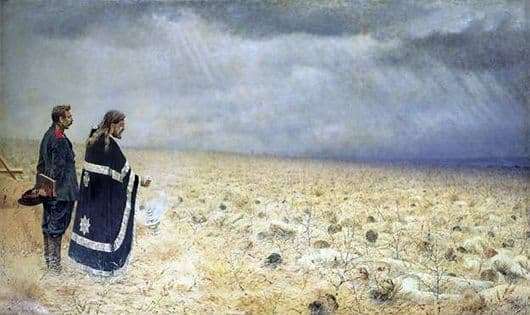 “The vanquished. Memorial service “refers to the Balkan series of works by the artist Vereshchagin. It depicts the devastating effects of the famous assault on the Bulgarian city of Pleven. For the Russian army, these consequences were expressed in enormous human losses.

By the time the picture was created in Russia, there was a tendency to depict military parades and maneuvers. Unlike many artists, war for Vereshchagin is always war. The great tragedy for millions of people, not only the dead, but also the survivors.

The canvas depicts a huge field and the sky covered with clouds. On the field are the bodies of dead soldiers, slightly sprinkled with yellow earth. The whole space, as far as can be seen, is occupied by the bodies of the slain, from the beginning of the field to the very horizon. Vereshchagin was able to transfer to the canvas a sense of melancholy, hopelessness and complete doom.

Near the field there are two people with uncovered heads. This is the commander, saying goodbye to the fallen soldiers, and the priest serving on them a requiem. Two living – and an immense field with the dead.

The painting “The Defeated. Memorial service “is made in restrained autumn-sum-valued tones: light blue, beige, various shades of brownish. These colors are chosen to emphasize the tragedy of the situation.

Contemporaries highly appreciated the development and execution of the work.

Cloth can cause a double sense. Compassion for fallen soldiers is one thing. Indignation that such a thing is possible is another. With such works, the artist addresses both his contemporaries and future generations, showing them what the word “war” really means. Not only beautiful parades, heroism, marches, but also such fields covered with corpses. This is the opinion of Vereshchagin, a Russian officer who went through many wars of the second half of the 19th century and died in the Russian-Japanese navy.