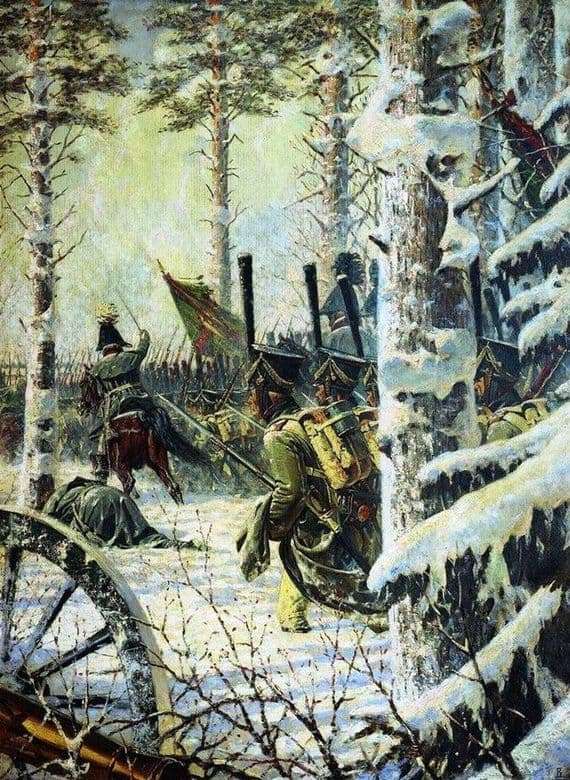 The picture is painted in oil on canvas.

Vereshchagin left an invaluable cultural contribution to our state. His work includes dozens of paintings devoted to Russia and the events in it.

The painting “In bayonets! Hooray! Hurray! “Is one of the paintings of Vereshchagin’s masterpiece cycle dedicated to the Patriotic War of 1812 with Napoleon. The artist created this cycle from 1887 to 1995. It includes twenty paintings. Also left unfinished sketches and sketches. Vereshchagin devoted many years of his life to her, he created work until his death and did not finish it this way.

During the work, the artist studied in detail all the facts and historical materials related to the war with Napoleon. He divided the cycle into two parts. The first part included the topic “Napoleon in Russia”. It describes the events from the battle of Borodino to the transition of the French troops in the winter. The second part describes the guerrilla war.

Cloth “In bayonets! Hooray! Hurray! “Completes the cycle. It is dedicated to the victory and attack by Russian troops of Napoleon’s army. The war is on the verge of completion. The enemy is retreating. The French went along the Smolensk road. They lost thousands of soldiers. The army is retreating, unable to bear the power of the Russian people and the harsh Russian climate. In the battle, seventeen guns and a banner were lost. The attack depicted in the picture, was played out at the transition to the Red in October. The enemy is defeated. Hooray! Hooray! Hooray!

Vereshchagin dedicated his life to this cycle in order to show the power and strength of the spirit of our people, and also to ensure that people stopped putting Napoleon on a pedestal. The artist made an invaluable contribution not only to the history and painting of our country. He contributed to the literature. To create his canvases he studied all places of battles, historical facts and wrote a very serious book devoted to the war of 1812.

The painting is in storage at the State Historical Museum.