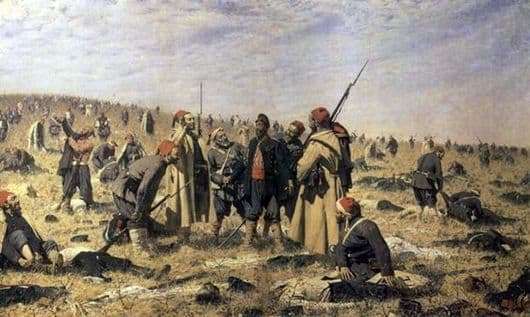 Vereshchagin merciless in the image of losses and victories. Vereshchagin, perhaps, is the only artist who was not subject to narcissism, and he could fairly truthfully display on his canvases the truth of military life.

And if Aivazovsky often depicted sea battles, then Vereshchagin on his canvases portrayed land battles and mostly Asian ones. He fell in love with Central Asia and therefore he had a fairly large series of canvases with oriental motifs, in addition there are many sketches, sketches, sketches. But he never departed from the truth.

On this canvas, he depicted the Asian winners. This is most likely the Turks. Across the hill after the battle, killed Russian soldiers lie, and the victors walk around them and take off their clothes and shoes from corpses, rummaging around in their pockets in search of something valuable. Everything found is worn or worn right here, next to the robbed dead warrior. But on the battlefield they found a soldier safe and sound. He was immediately surrounded by the Turks and began to be viewed from all sides. Some of them will get it himself. Someone will get his coat, and someone else something valuable, if he has one. But the fact that he will go into slavery in this can be no doubt.

The artist conveyed some insecurity in this picture. Something fleeting and not understandable. And most importantly, he made it clear that the Russian soldier does not always win. This is probably his main truth in this picture. And this, of course, caused some confusion among the patriotic capital of the capital. They could not believe that this could happen to Russian soldiers. But such things happened, sometimes battles were lost.

It just didn’t happen that often. And it was about the loss and told the artist. Moreover, he depicted the “barbarians” with exquisite precision in their immediate environment, in the very center of Central Asia.