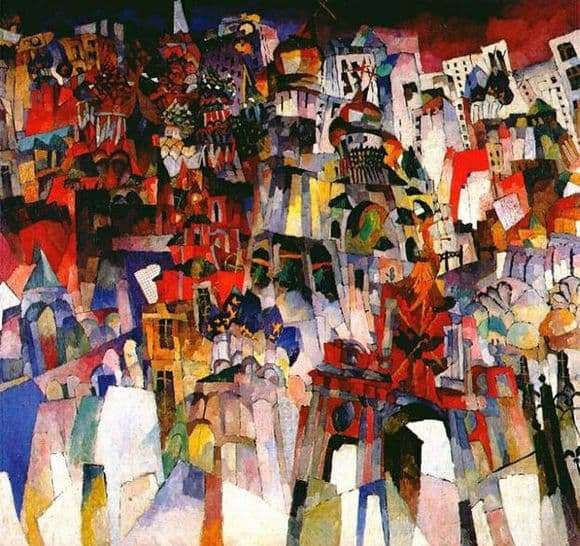 Aristarkh Lentulov, a Russian and Soviet artist, one of the first Russian avant-garde artists, united several areas in his painting: expressionism, futurism, post-impressionism, cubism, and even primitivism. This is the last work. Although even here, primitivism is not in its pure form – this kind of “primitive exaggeration”, intentional gigantomania, is all huge, massive, condensed into a single monumental mass, like painting itself.

The artist works magnificently with the contrast of dark and light tones. Its movement of colors is striking: it is not canonical transitions from the center of the canvas to the edges, but movement from edge to edge, in different directions. This was the painter’s handwriting. It is enough to look in the upper left corner, where there is a lot of black color (in combination with red), and move to the lower left corner, where the blue and white tones shine, – to see this style.

It is impossible not to agree that everything depicted seems to be moving, merging into a single system, although there is not a single living creature in the picture, that is, walls, buildings, domes “move” … Conscious and deliberate density of colors plunges the viewer into this panel becomes an unwitting participant in this system of buildings.

The picture is called “Moscow”. This is quite true, although one could add “architectural” to the word “Moscow”. After all, here we can really observe the capital in various architectural solutions: churches (including St. Vasily’s Cathedral, which the artist treated reverently), two-story houses, perhaps even wooden, Kremlin chambers, panel multi-storey buildings.

Together with other fellow artists, Aristarkh created an exhibition called The Jack of Diamonds, in which the picture in question was first presented to the mass audience and was a smash hit with the latter.