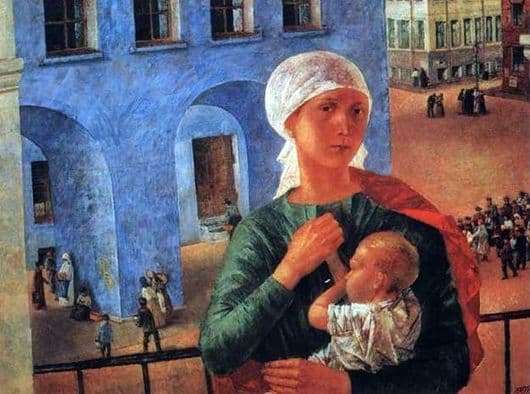 This picture of Kuzma Petrov-Vodkin is often called the “Petrograd Madonna”. And those who so baptized her are right, because a nursing mother with a baby, standing on the balcony of a city house, even in facial expression, resembles an icon painting.

A woman’s hair is hidden under a white kerchief, scarlet matter is draped over her shoulder – a kind of symbol of revolution. The young mother is tired and at the same time stern look. But still, there is some ray of hope for a bright future. And its symbol is the sky-blue building, located behind the ladies.

Glasses in this house look weird. They are not either broken in places, or they are tightened with cobwebs, or maybe just covered with dust. Probably, this house left a rich family, and ordinary people have not yet settled.

The streets are rather deserted, unless you count the crowds, which critics have positioned as a line for bread, personifying a hungry time. However, neither the bread nor the seller is visible to the viewer: everything is hidden by the figure of the mother, who has nothing to do with what is happening below. This is all transient, the main thing for her is to raise her baby.

Someone will grasp in this baby the symbol of the nascent Soviet country, and someone in the image of the mother – Russia. That is, we can say that this is no longer an icon of the Mother of God, but still not yet the image of the Motherland, which began to be exploited en masse somewhat later. Especially often he was addressed in the days of the Great Patriotic War and after it.

The idea of ​​the canvas “1918 in Petrograd” – this is the official name of the painting – can be expressed as follows: there will be no devastation and poverty, we will be able to overcome it. Motherhood is the brightest symbol of continuing life, it is like a grain that sprouted among the stone walls of starving Petrograd.