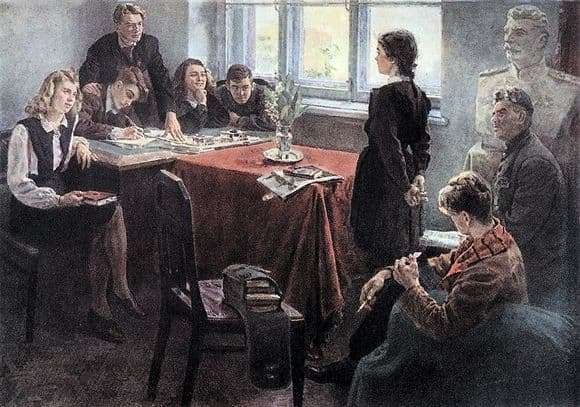 The painting “Admission to the Komsomol” was written in 1949, the materials for creating the work are canvas and oil, the size of the canvas is 143 by 202 cm. By genre, the work refers to genre painting, in style to social realism. Currently, the picture is in the museum of Ukrainian art in Kiev.

The painting “Admission to the Komsomol” by Sergei Alekseevich Grigoriev is a vivid example of Soviet painting, and in 1950 the artist earned the honorary title of the Stalin Prize for it. The canvas was printed on the pages of school textbooks, postage stamps with this picture were created. The main thing in this picture is not so much the pictorial side, but the plot, which is why the tones are chosen restrained, muffled.

The main heroine of the picture is a girl, who has her back to the viewer, dressed in a school uniform. We do not see the faces of the girl, while the faces of the others are full of joy and hope. It can be assumed that the artist deliberately depicted the girl’s back to us, so that we could feel ourselves in her place. Grigoriev masterfully writes each character, faces are very expressive, each has a character and mood.

By the way, one of the heroes is also one inanimate object – the bust of Stalin, standing in the background. It must be said that the picture has two versions: in the first version, before the death of the leader, the bust is still present, and in the later version it is no longer there. We are considering the original version of the picture. The situation is filled and even overflowed with solemnity and pathos.

A red tablecloth, a vase with lilies of the valley on the table, the patronizing views of the examination committee that hosts the new member, stretched to the limit the girl’s posture. The girl here appears as a kind of collective image, the personification of the younger generation of the time.