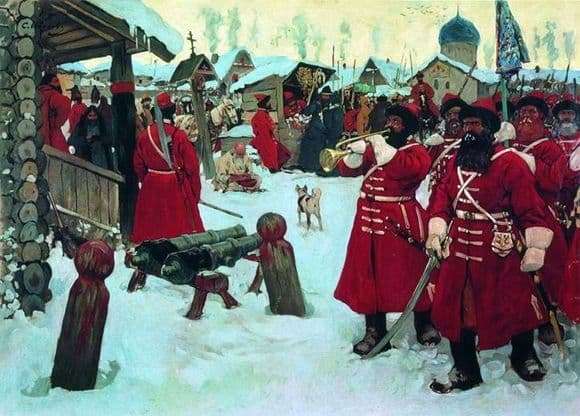 Sergey Ivanov was born in 1864, and in his childhood he showed a penchant for drawing. However, his father, who was sure that a decent person could not feed himself with painting, sent him to study engineering, seeing this as a kind of compromise – in his opinion, it was necessary to draw there, but the engineer would still be more honorable and profitable.

After studying for three years in an unpleasant institute for him, Seryozha – then a boy of 14 – left him and went to the Moscow School of Painting, where he showed himself as a diligent student and a talented artist. His favorite genre remained plot scenes. Inexplicably attracted his village life, the past of Russia, the problems of social inequality, which, with the help of critical realism, he displayed in his paintings as accurately as possible.

“Sagittarius” – one of his historical paintings, written, as always, in broad strokes, without a thousand details per square centimeter, but alive, understandable and consistent with the truth. On it the Streletsky regiment returning from a campaign. A trumpeter bangs, sways on saber crossbands, a square flag flutters (each Streltsy regiment had his own, specially designed), horseback riding, and riflemen’s faces are tired, solemn and a bit menacing.

Return, most likely with a victory. And the people around live their lives. A kolchenogaya doggy does not pay special attention to the crowd of people in red, without a shame having turned his tail to them, the blind old man collects alms, the service in the church probably goes, the trade continues in a small shop.

No one intends to interrupt in order to meet or at least rejoice at the arrival of the archers, and all because they are the same life of everyday life. Go on patrols. Sometimes they go to war.

Sometimes it is their business, but it’s necessary to live. There is an archery regiment in the city, and it seems that in the desert.