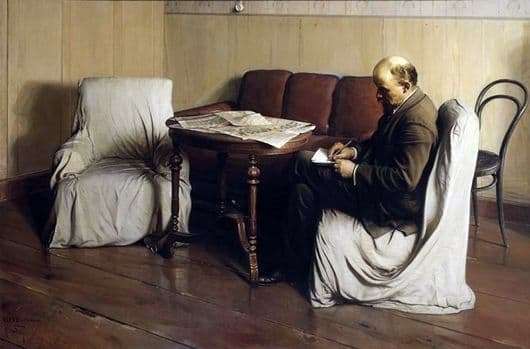 “Lenin in Smolny” – a picture of the famous Russian painter I. Brodsky, written in 1930. By this time, the artist has repeatedly portrayed the leader. His brushes belong to small sketches from life, and large paintings. Brodsky is recognized as the master of the image of V. I. Lenin. Brodsky chose a real place and setting for his picture, emphasizing the veracity of the image.

Lenin is depicted in an office in Smolny at work. With this work, the master sets himself the goal of not only depicting Lenin in portrait likeness, but depicting the leader in all the tension and difficulties of his constant work. The viewer, looking at the canvas, feels like being next to Lenin, because he is depicted almost in natural height.

The environment surrounding the leader is spelled out as clearly as he himself. Cabinet modest and discreet it conflicts with the importance of the decisions made by the master of the cabinet. The situation with its asceticism tells the viewer that the power of the Bolsheviks is responsible, first of all you need to think about business and work. Lenin is depicted sitting in a chair at work at a small elegant table. Slightly bent over, he writes. The simplicity of the image perfectly conveys a sense of silence and alertness.

The color gamut of the canvas is soft, restrained, soft ocher shades prevail. The accuracy, accuracy of the artist’s drawing of the details of the room, the costume enhance the authenticity of the image and help emphasize the significance of the depicted moment for Russian history. This picture was written after the death of Lenin and was intended to preserve his image through the ages. The painting “Lenin in Smolny” becomes the most popular and beloved image of the leader.