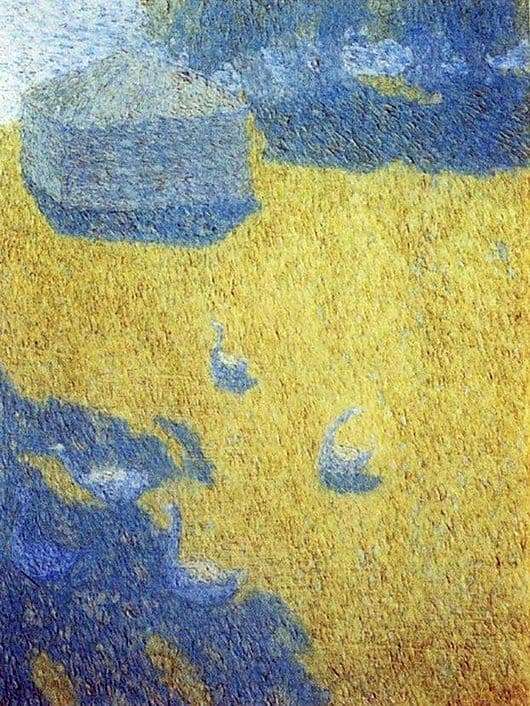 Krymov – famous Soviet painter, teacher. The painting “Under the Sun” is a vivid example of Russian impressionism. The canvas to some extent resembles Van Gogh’s paintings – the same strokes, one after another, applied, creating texture and forming a rhythm, movement, the same contrasting and somewhat improbable, but bright and vivid colors.

At first glance, the picture seems to be a simple two-dimensional flat, two-color composition, completely inexpressive, more like a tapestry or embroidery. And it is important to note that the basic rules of composition are observed here – the construction is free, not overloaded, a circular color spot in the lower left part, in the upper right, and small specks in the center.

Then, peering, you can see what is depicted here – a beveled bright yellow rye field, geese grazing on it and tend to hide in the cool shadow of the scorching sun, a stack of harvested hay, green trees in the distance, casting the same bright blue shadows… and behind them – cloudless transparent summer sky… The sky is not clearly marked in the picture, the focus is on the shadow close to us and on the geese.

Although the canvas is stylized, the picture feels the dynamics transmitted by means of lines, and the image is quite realistic transferred, especially the rye and its texture.