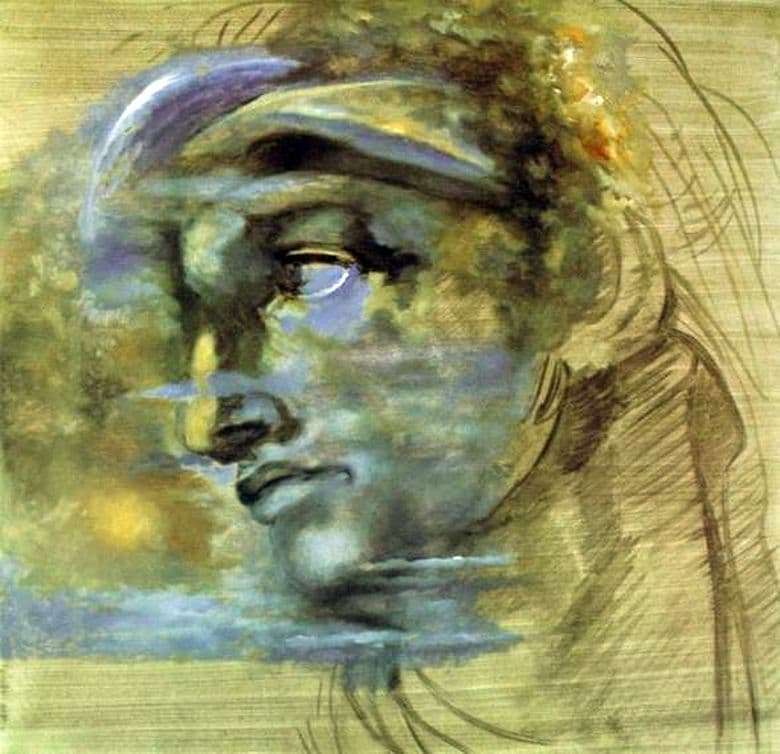 This picture belongs to the late stage of creativity of Salvador Dali. At this time, after the loss of his beloved wife, he increasingly thinks about the meaning of life, immortality, human destiny and the infinity of time. The work “The head of Giuliano di Medici Michelangelo” is one of several attempts to rethink eternity.

For his purpose, he turns to the image of the great figure Michelangelo. The painting depicts an amazingly handsome man with big eyes, radiating calm and confidence. In the eyes of Michelangelo read thoughtfulness and sadness. So Salvador Dali conveyed the pain of losing a spouse. The elegant and at the same time energetic turn of the neck shows strong cheekbones and a strong-willed chin. The correct shape of the lips is clearly traced. The pose of the captured man, the turn of the head and the profile view refer us to the traditions of the Renaissance, when special attention was paid to the exact description of the human face.

The picture is made using an unusual technique. She demonstrates a mix of different characters and techniques. The classic display of a beautiful profile, mysterious and surrealistic at the same time, is done in oil in the best traditions of the Renaissance. At the same time, there is also a schematic sketch in the work.

This is a tribute to the modern Salvador Dali era, which is characterized by abstract forms and lines. The combination of two different ways of writing have a special meaning. Oil paints the entire face and background around it. Sketchy drawing gets the shape and depth. Salvador Dali rethinks his role in art and real life. Only painting is able to convey the subtle feelings of the artist and transfer them through entire epochs. Human life is fleeting. But art is immortal.