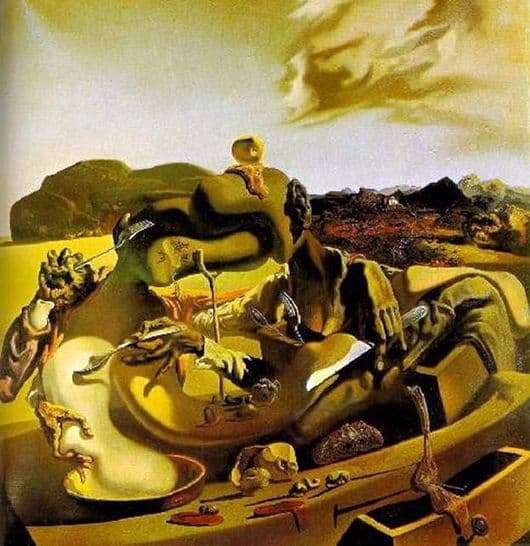 The canvas was written by a famous Spanish artist in early 1936, has a brightly political and military orientation, as it expresses the painter’s opinion about the situation prevailing in Spain at that time, namely the eve of the Civil War.

The pictures are painted in Dali’s peculiar style, that is, replacing the usual things with what they are, or, on the contrary, are not in reality. So, on the canvas you can clearly see 2 cannibals devouring each other from the inside, at the same time hostile and loving each other. Anyone who is familiar with the history of Spain at that time makes it clear that cannibals are tearing the country apart and eating it from the inside by the citizens themselves who have taken this or that side in the war, for which the rest of the country readily prepared them weapons and other aids.

That is why cannibals are not eaten with their hands, but with the help of cutlery – forks and spoons. Bone-like objects are scattered around their bodies in disarray, and the bodies themselves lie on a chest of drawers, one of the drawers of which is ajar. Ants scurry about everywhere, which the artist always has to do with destruction.

In the background, blushes from the fire, or the blood of the earth, or rather what is left of it, shining trees in dark silhouettes. The foreground of the painting is well lit, while in the distance darkness is coming in the form of a flowing cloud, which seems to be no reason to be in a clear sky. And it is not clear until the end of this cloud, or smoke of future battles.

Soon after writing the picture, Dali leaves his homeland and goes to America, not wanting to be dragged into the massacre. In America, he was waited by indestructible success, and the paintings began to be bought up with a new force, everyone wanted to find out how he was experiencing a Spaniard far from his homeland, what he feels, and the artist was very eagerly surprised and impressed by those who appreciate his work.