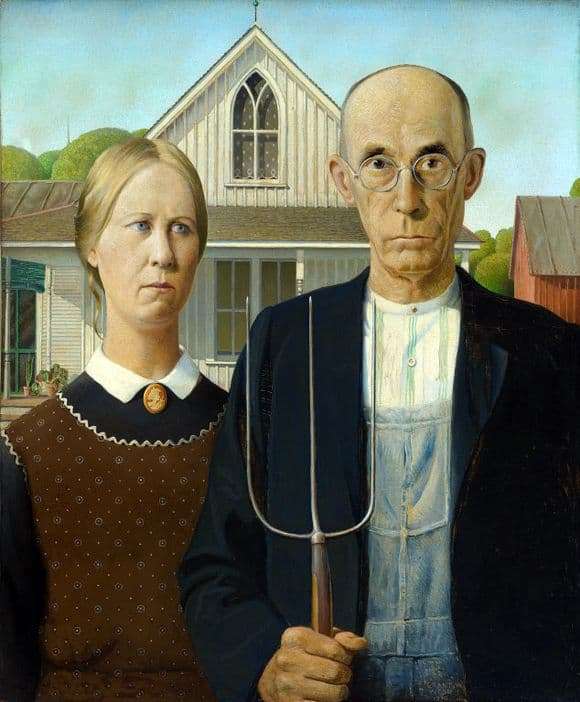 Wood depicts a farmer and his daughter against the background of their fairly simple home. The building was built in the style characteristic of the time of the artist carpentry Gothic. We see that the farmer is tightly clenched in his fist forks. It seems that this is not a weapon for work, but a special type of weapon.

The artist conveys the complete unattractiveness of this farmer. His lips are tightly compressed. His hair is tightly pulled, his head slightly turned. In the eyes you can read a very deep insult and genuine outrage.

On the daughter we see an apron, which was already old-fashioned at that time. Her face expresses determination, her lips are compressed, her eyes read a challenge. She fully supports her father.

On farm clothes, you can see stitches that completely resemble the shape of the forks squeezed in his hands. The same contours are repeated in the windows of his house.

The composition of this canvas is created in the style of American photography of the 19th century (the very end). Characters are as restrained as real Puritans. It was at that time that the artist became acquainted with the advanced trend “New materiality”.

Why did the painter write this canvas? Once he saw a small, seemingly unremarkable house. But he fully attracted the attention of the artist. Voodoo wanted to portray this building and to dream up a bit, imagining who could live in it.

The artist’s sister became the model for the farmer’s daughter. People and the house the artist wrote completely separately. That scene, which is depicted in this picture, in fact never existed.

The artist explained to contemporaries that he wanted to create a collective portrait of all Americans of that time. Critics were fully confident that the canvas became an important part of the most critical image of rural America at that time.

Later this creation was associated with the unshakable spirit of the pioneers of the country.