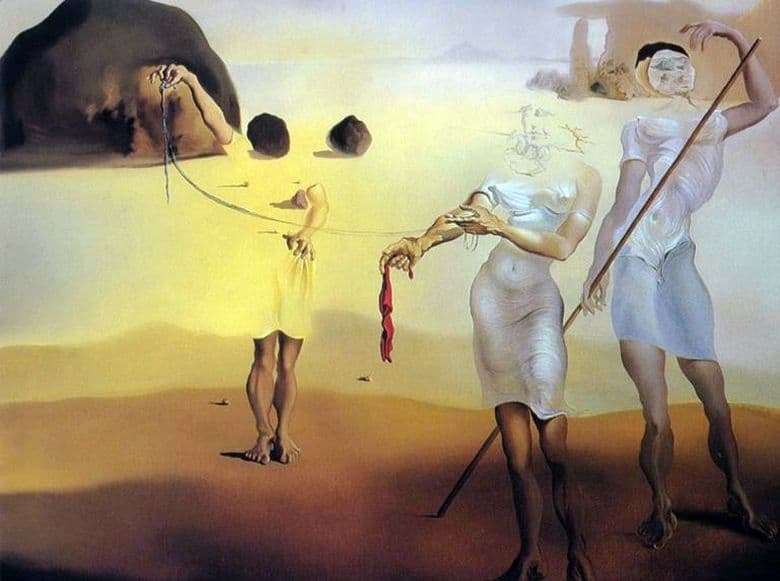 The picture we are reviewing is a reinterpretation of ancient Greek mythology. In the traditional culture of grace, they are naiads, personify joy, charm and beauty. But Salvador Dali refuses the common reading and makes reference to another myth that tells about the three goddesses of fate, Moirah, in whose hands is the fate of each person.

The figure on the right is holding a long instrument in its hands, on which the lace of human life will lash. The goddess in the center measures the fateful thread. Her image symbolizes the life of a person from birth. The figure on the left is responsible for death and decides when the threads need to be torn.

The “liquid” of the graces is due to the fact that their faces are as if inscribed in the landscape. The face of the goddess on the right is outlined thanks to a stone arch located in the distance. The features of the beautiful face in the center are formed by the figures of the rider, the horse and the man running behind them. In the third grace, we do not see facial features at all. Her head replaces the dark stone. It is very symbolic. The first two figures personify the life of a person from the moment when his soul was born until the last day. This life is beautiful, as can be judged by the calm and relaxing facial expressions of these goddesses and their elegant poses.

In the guise of both of them under the weightless white clothes hiding female silhouettes. Beautiful lines of shoulders, bulging and feminine chest, lush hips – these images are humanized and understandable to every viewer. In contrast, the third figure is almost incorporeal. Her robe merges with the color of the sand. Against this background, strained fingers stand out clearly, clutching the fabric of the dress and holding the thread tenaciously above the head. Death is impersonal and ugly, but at the same time inevitable.

This picture is an attempt to comprehend the transience of human life.