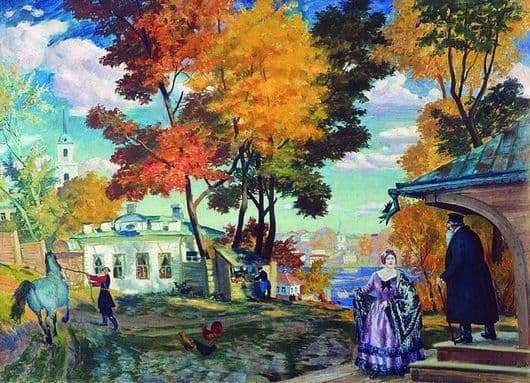 Boris Mikhailovich Kustodiyev – Russian painter of the late XIX first quarter of the XX century. The painting “Autumn” is part of a series of three paintings entitled: “Autumn in the province” and “Autumn over the city.” The canvas was created in 1924, today it is injured in one of the private collections, as a result, it is not available for free viewing.

In the picture, the artist depicts autumn in all its colors, such as the pampered residents of the big lordly estates, one of which is seen in the background of the canvas, saw it.

The foreground of the picture is decorated with the image of a woman in a bright lush dress, to match the surrounding light and iridescent nature with all the colors of the rainbow. The woman apparently went for a walk and met her friend, who went out to admire a warm autumn day on the porch of her house. The landscape is typically rustic, chickens and roosters are running around, the peasant is trying to appease the white horse that has played out, the road runs straight to the shining blue river. Everywhere vanity and fun reigns, the surrounding nature and people rejoice on a warm autumn day.

Crowns of brightly red trees rise above a large manor’s house, some of them still retain summer greens, or original yellowness, while others are ready to appear in all their glory before anyone who has decided to go on a warm autumn day along a village street. Behind the houses and trees can be seen the bell tower, as well as the tops of the trees goes up and rises to the blue and clear sky.

On the other side of the river you can also see houses and, apparently, another village. The surrounding landscape beckons to go into the woods, fishing, mushrooms, arrange a rest and an unforgettable walk on the fallen leaves. This is the brightest of the three paintings presented by the artist, the most beautiful and spiritualized, the one that is remembered at first sight.