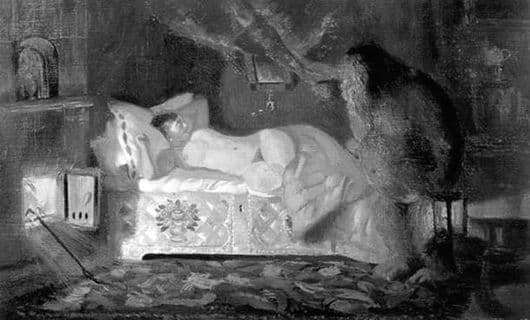 Kustodiyev liked to depict provincial Russia in his paintings. Those villages that were located on the upper Volga especially attracted him. It was here that those images of merchant and bourgeois everyday life were born that became the themes of his creations. The original motive of the fair and Maslenitsa was constantly varied by the artist. The effect was always the most motley, colorful and always major. This is a special closeness of the artist’s works to folk art.

Gradually, the beginning of the ironically-theatrical is growing in the composition of paintings. The feeling of idyll, irreality filled with nostalgia and sadness is getting stronger.

We see the merchant and the brownie standing in front of her. The furnace furnace is open. The fire at night creates a special impression. It makes a characteristic crackle, casts fancy shadows. Such sounds can not only appease, the appearance of unaccountable alarm is possible. Before the open door of the oven lies the carpet. This situation is extremely dangerous, as sparks can accidentally fall on him.

The merchant of Kustodiev is completely defenseless. She sleeps in a completely open pose. Her bed – a chest with a blanket of fluff and feather beds. The feather beds are allegorically connected with the clouds of paradise. According to the official religion, a brownie belongs to the dark world. But earlier he was considered the real owner of the house, who protected him from all evil. The presence of a brownie was considered the norm.

Brownie is depicted by darkness and gleam. The lantern next to him shines back. The question arises, why did this character come? Most likely, he foreshadows something bad. The glow of a fire burning in a furnace is the real quintessence of anxiety, the danger of a global scale. The intensity of the color indicates its great strength.

In the combination of shades there is a special aggression and incredible pressure. Red as bright lightning tears through all the space. A small gust of wind is enough to spread the fire throughout the room.

The picture evokes a growing sense of anxiety in the audience.