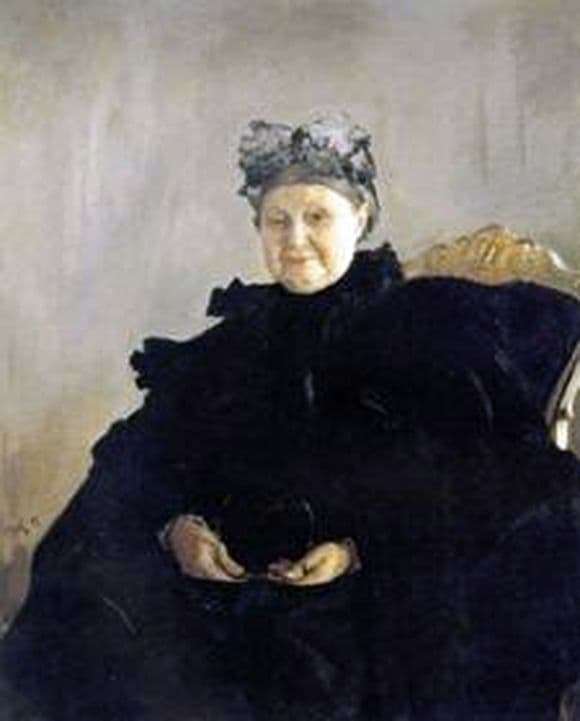 The first work in the series of portraits by the Morozovs, rich people known in Russia, was Serov’s canvas depicting an elderly Maria Fedorovna. The portrait was executed in 1897. What is interesting about the image of the richest Russian woman?

MF Morozova placed in the focus of the portrait on a neutral inhomogeneous gray background. The figure of a woman is sitting in a chair. Gilding on its back and soft velvet of dark blue upholstery are noticeable. The lady is dressed in a black dress, its contours are unclear. The dark mass of fabric seems to seize the figure, ominously stretches from somewhere below. Black color gives the appearance of a certain monumentality, seriousness, significance.

The paradoxical impression is made by the frills of the attire at the gate – they are similar to funny ruffles, they look ridiculous and ridiculous at a mature woman. Gray hair is neatly tucked away behind a shawl tied with a bow, which also looks slightly out of place and ridiculous. The hands of the heroine rest on their knees, holding the glasses removed.

The face is the central link of the image. In it we notice some imbalance. The right eye is slightly closed, and the left eye is looking ahead and intently at the viewer. In the face of Morozova, resoluteness and readiness to go towards the goal is visible despite everything.

One feels in the portrait of a millionaire the artist’s hostile attitude towards her. As if he is confident in the dishonest ways of achieving her great wealth. There is no light and spiritual content in her frightening, but somewhat miserable figure.

“A strong, clever old woman,” the portrait author so boldly called Maria Fedorovna. This “mother” of wealthy manufacturers and merchants is clearly overbearing not only in relation to employees, but also with their own sons and husband – Timofey Savvich.

Carelessly executed background clearly differs from the detailed study of facial expressions and details of the face. Serov was able to describe a distinct character in a limited color palette.