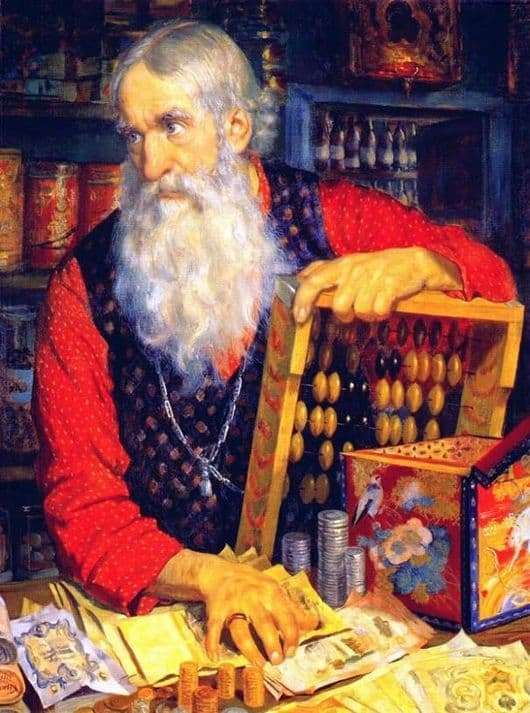 Kustodiyev always wrote richly. That is, his paintings were always bright, colorful, juicy. Open to the maximum, with a pure Russian expanse. He often noticed such subtleties of Russian being, which sometimes no one had noticed before.

The artist rarely turned to the portrait direction. But if he did it, then it turned out to be masterfully executed faces. For example, this portrait of “Merchant counting money.” We can say that it is rather an illustration of Pushkin’s famous “Little Tragedy” “Miserly”. Although the person on the canvas is purely Russian, but still…

See what his look. Oily, but at the same time, solid – I will not give it up! This is far from being a tired worker, although he also has to work in a shop. Otherwise he would not be able to earn a fortune and live so happily. A rich vest, a chain with a watch, a broad beard – everything was written out perfectly. And hands? These are not tired hands. These are already quite well-groomed hands of a stingy person, because something suggests that he is very greedy. At least, the hand put on the money, they say, all my – I will not give it to anyone, says a lot.

But on the other hand, without such merchants, Russia would not have been formed at that time. Suffice it to recall that in 1913 Russia came in first place in terms of economic indicators. But the merchants are the very small screws that moved the economy to better times. The truth soon it all collapsed and depreciated. But so far, in any case, on the canvas we see a well-fed well-groomed merchant who earns enough to live comfortably for some time.

Kustodiyev is still more a landscape painter or a genre artist. It is enough to recall another half-portrait of the “Merchant over a Cup of Tea”. It is even more like a genre scene, where the main role is assigned to her – burly, noble blood, a merchant.