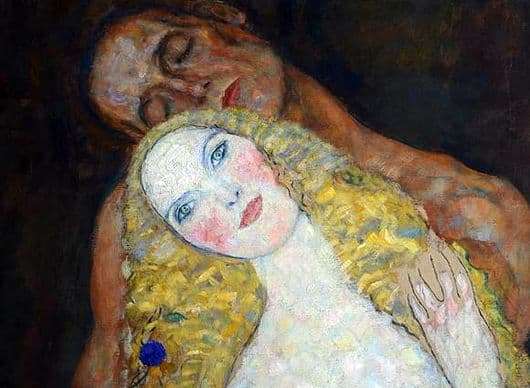 Klimt is a modernist. Just almost all of his paintings fit this style, modern style. All of them are vivid and memorable, just like everything that was done in the framework of this style. It is impossible to walk past a building or a masterpiece of art nouveau painting without paying attention to it. It’s all about its elegance, it’s all about the image – the softness of the forms, the flexibility of the details.

Klimt’s style is unimaginably beautiful. Suffice it to recall his painting “Kiss.” For the colorful pattern of the cloak, do not immediately discern kissing. “Adam and Eve” – ​​as if the continuation of the theme of “Kiss”, but only more frank. The image of Eve, the naked Mother of the World, dominates on the canvas. She is depicted against the background of her husband. By the way, Adam’s figure is depicted as something vague.

We see his face, his shoulders, but his legs are covered with the skin of a jaguar. Most likely, this is an image of this couple after the fall. Look at the face of Adam – it is tired and haggard, Eve is glowing with some universal peace, but in the eyes is slyness. The skin of the leopard covers Adam, and at the feet of Eve – flowers. Even despite the brilliant nakedness and clearly provocative – Eve is beautiful.

Klimt this canvas reminded us of where the woman came from. Adam is depicted in such a clay color. After all, according to legend, he himself is made of earth, but a woman is from a man’s rib. And this is how the artist did it: the right hand as it dissolves in Adam – this is a hint or even a symbol of the unity of souls.

Klimt did not create as many paintings as some of his great colleagues, but the fact that there is quite enough to recognize him as a great master of painting.