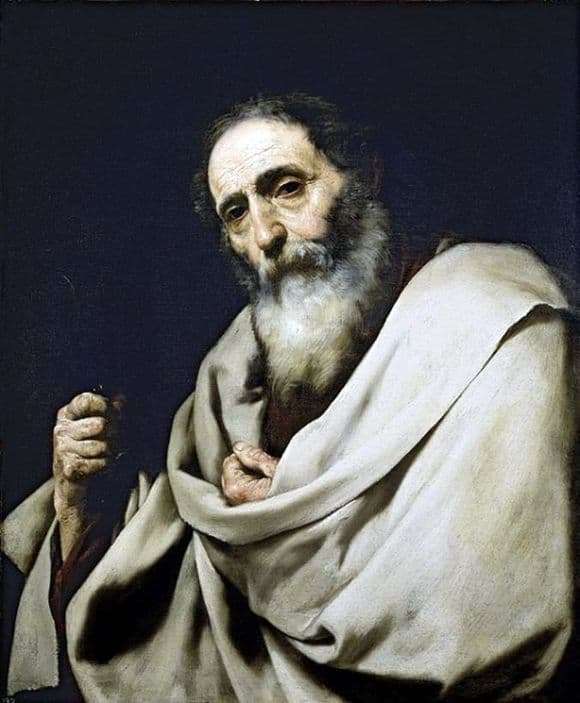 St. Bartholomew was one of the apostles who, after the ascension of Christ, went to preach his faith in Asia Minor and India. He traveled there for a long time, speaking to the people and to the thrones of the kings, until one of the Armenian kings met with the desire to get rid of the annoying preacher, who called his people for peace.

Bartholomew was seized and crucified upside down on a cross, but he continued to preach in that position. Fearing that he would confuse the guard, the king ordered to tear off his skin and behead him, which was done.

The painting depicts St. Bartholomew before these terrible events. Against a dark background, his gray traveling garment almost glows. In his hand, the stick of the wanderer is clamped, relying on which, he passed many roads. His second hand is pressed to his heart. The face of the apostle is like a skull.

He endured hardships, was starving and tired, he spoke before indifferent and cruel ones, he went through half the world to bring the teachings of his Teacher. His beard is already gray, his face is wrinkled. He managed to grow old in his wanderings, but the light illuminating him from within does not seem dimmer.

Saint Bartholomew does not look at the viewer at all. His gaze is turned a little to the side, as if there he sees lands that are waiting for his coming and conversion. There is no shadow of doubt or cruelty.

Not wanting to carry faith with fire and sword, he wants to carry it with a kind word and mercy, as Christ taught. After all, all Christian faith is love, and God is love, and towards the neighbor, and towards the enemy, love must be experienced. It is this feeling – the love of all, of every person – that is in the apostle’s view. No one is bad. No one is worthy of hate.

And you can be sure that even if he happened to find out his fate in advance – the cross, the terrible penalty, the skin removed – the apostle would not have turned, and from his gaze, from the back of the head, from the clenched hand at the heart, this is crystal clear.