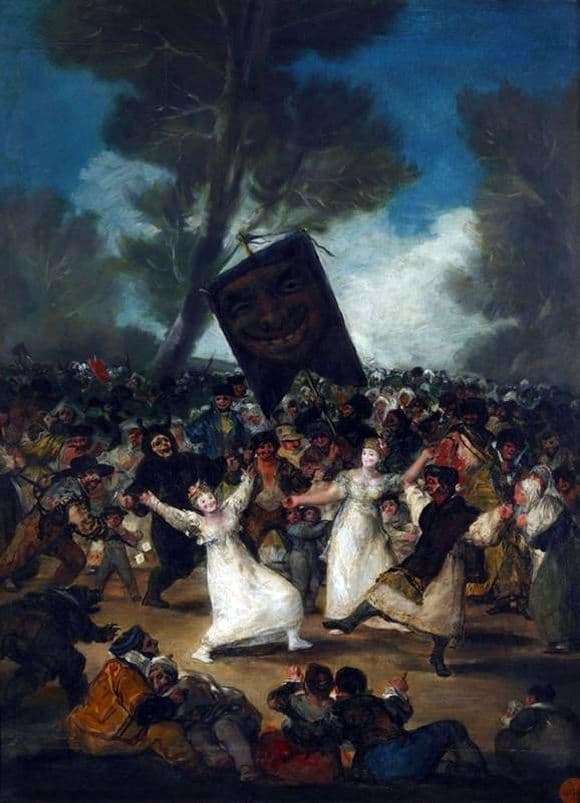 The canvas belongs to the brush by Spanish artist Francisco Goya. The exact date of its creation is unknown. It is assumed that the picture was painted between 1812 and 1819.

The centerpiece is a raging crowd of people carrying a banner with a smiling mask in the center. The name of the painting is associated with the custom that originated in Spain in the XVIII century.

One day before Ash Week, when all the people of Madrid gathered in the central square to participate in a three-day carnival, the king of Spain ordered to treat them to sardines. Unfortunately for the reputation of the monarch, the sardines were not fresh. However, such a sad circumstance did not upset the citizens at all. By this time, they drank so much wine and other alcoholic beverages that they did not find anything funnier than arranging a funeral for a sardine.

The action seemed so ridiculous that the next year it was decided to repeat it. At this time, were used in advance spoiled sardines. The Spaniards liked the funeral of the sardines so much that they soon became overgrown with new clownish customs and rituals.

It should be noted that as ardent admirers of the Catholic faith, the Spaniards did not see at all in such an absurd action something blasphemous, therefore, in the days of Goya, tradition was not forgotten. Judging by how lively the characters are spelled out in the picture, the artist took a personal part in the “funeral procession”. In the capital of Spain, the farewell procession was led by “Uncle Chispas”, his daughter Chusk and the young lovelace Juanillo.

It was they who led the crowd carrying a huge effigy with a sardine head. The procession began on the main square and ended at the shore of Manzanares, in whose waters the ill-starred sardine found rest. Modern residents of Spanish cities and villages also honor a similar custom.