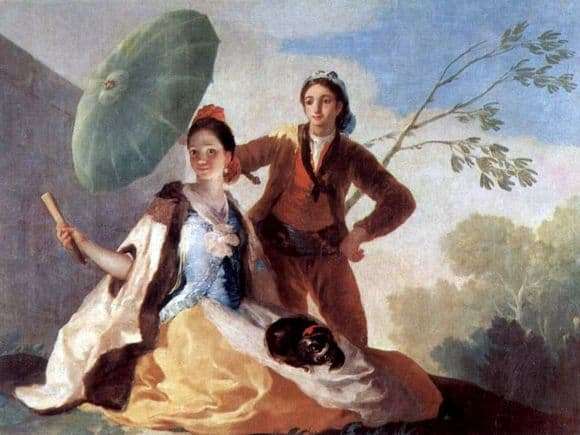 The Spanish artist Francisco José de Goya y Lucientes, or better known to us Francisco Goya, who wrote engravings, was one of the most prominent artists of the 18th century.

His painting “Umbrella” was written in 1777, when Francis was only 33 years old. This picture is recognized as the best creation of the early Goya. She liked the artist himself. He managed to portray the warmth that he wanted to show in his picture.

In the eighteenth century, the decoration of houses and halls with tapestries became fashionable. Once Francis Goya and made an order to create such paintings. So, Goya created his “Umbrella”. But the umbrella itself is not the main detail of this picture. A gentle green umbrella here, most likely, is only a small zest. And the main characters are a man and a woman. She sits in a clearing on a bright, sunny day. And the boy covers her with an umbrella on the left side.

Goya managed to convey the tenderness of the composition with the help of properly selected colors. The artist used warm shades of red, orange, peach. He dilutes them with his blue corset and the blue belt of a man. The picture has a lot of green color. This is an umbrella, a greenish sky, and trees from the side.

I wonder who these two are? Maybe Goya portrayed the servant and mistress. And maybe it’s a couple in love. The girl sits near the stone wall, in the hands of her fan. On her lap sits a dark dog with a red collar. She is dressed in dresses with a golden skirt, and on her shoulders a long cape flaunts.

On the chest is a beautiful flower brooch. There are red jewelry on her head, in her ears there are pearl earrings. On her face falls a slight shadow from the umbrella. A young man stands behind her. He is wearing a red suit, with golden buttons, and on his head is a blue sunscreen.

Today the picture is in Madrid, in the Prado Museum.