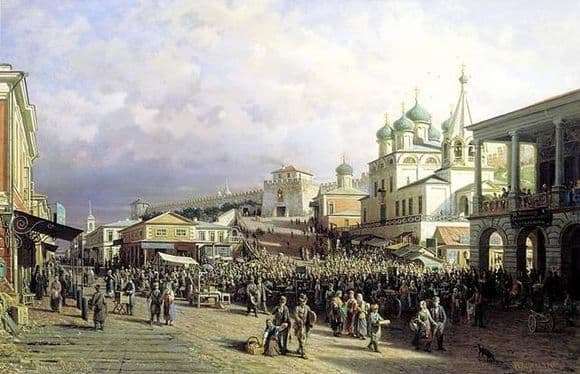 Petr Petrovich Vereshchagin, being a researcher of painting, an academician and an artist, was interested in such areas of visual art as realism, and his favorite genre was, of course, the landscape.

The artwork of Vereshchagin is full of photographic, as if the viewer is looking at the photo just taken on the camera, which is undoubtedly a great achievement of his talent for the time frame in which he worked – the nineteenth century.

Also, most of the works of Vereshchagin are characterized by a linear perspective, critics note that the artist’s paintings are very similar to each other in compositional construction and use of plots; , conveying the inner features of the city that he portrays, but in order to show all the inner content of Nizhny Novgorod, its spirit, the artist, undoubtedly, needed its citizens, who crowds walk along the bustling market square, looking at all sorts of dishes, souvenirs – in short,

everything that rich merchants and shopkeepers brought here.

Traveling throughout the Russian Empire, Vereshchagin created a lot of landscape paintings of such large cities as Moscow, St. Petersburg, Kiev and Sevastopol, the artist and small towns of the Volga region did not fail, he visited the western provinces, Finland, the views of the Urals and Caucasus, and, of course, the Crimean city were the favorite places of the artist.

Therefore, contrary to the popular opinion of the community of art historians, each picture of Vereshchagin has its own unique individuality. So, Veliky Novgorod is the largest trading intersection of the Russian Empire, the noisy market square makes a loud, cheerful hum that echoes in the heavenly heights, just about ready to spill out in the warm summer rain. The semi-threatening sky hanging over the city is dissonant with the citizens, who are so passionate about the process of choosing goods and buying them, and maybe, on the contrary, it drives curious people to return to their homes and free up the stuffy, heated square.