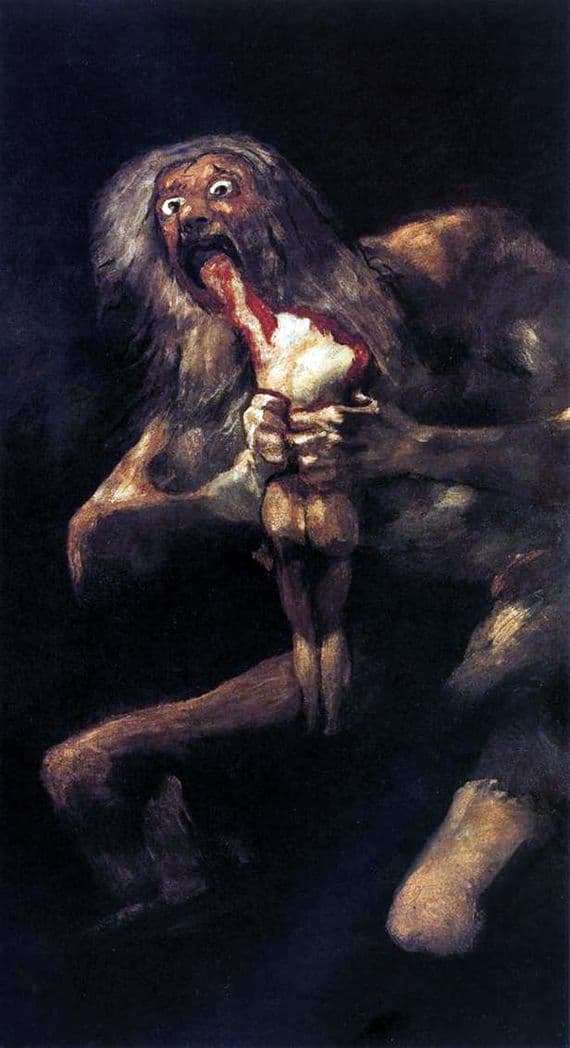 If you follow the usual interpretation, then in the painting by Francisco Goya, Kronos, a god from ancient Greek mythology, is depicted. The name Saturn dates back to the Roman era. This deity, following the prophecy, in which he was predicted the overthrow of one of the offspring, devours still living children.

But the artist interprets the story in his own way. In the myths, Kronos ate babies that were completely swaddled. Here we see that the heroes of the work are completely naked. Initially, the picture was painted on the wall of the house of Francisco Goya, but after a few years it was transferred to the canvas.

The background of the work is blackness, symbolizing the emptiness that comes at the time of each death. God is like a hungry old man: his limbs are dry and sinewy. Skin color is more suitable for a sick creature. The eyes of Saturn demonstrate, so to speak, the last degree of madness. A little more, and they roll out on the nose. Complements this feeling and disheveled hair falling down with dry ears. God opened his mouth wide, as if trying to stuff as much as possible into his mouth at once.

Some researchers claim that in this way the artist demonstrated the relationship between the open mouth of Saturn and the gates to hell, where his children disappear one by one.

Squeezing his hands tight, God holds the rest of the body of one of the offspring. Red spots are visible on the sides of the deceased. Saturn clawed so tightly into the flesh of the child that blood came out. Francisco Goya captured the moment when the head was already hidden in the depths of the body of a cannibal, and God moved to devouring the hands of the baby.

The artist, using gloomy tones, successfully conveyed the feeling of the horror that an unwitting viewer could have at the sight of such an action. Not a single bright color, with the exception of red, was used in the work.