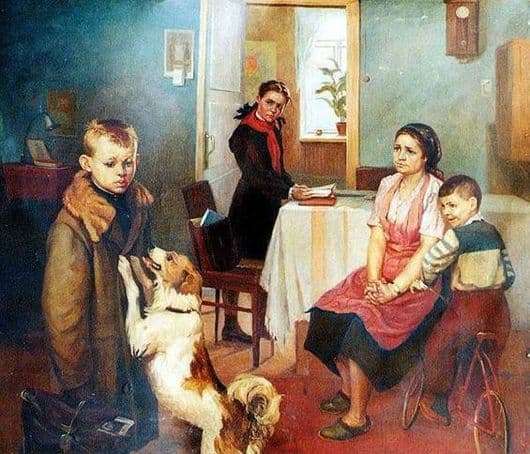 Most Soviet schoolchildren know the picture of Fedor Pavlovich Reshetnikov “Again the two”. Many students are in a similar situation, when a bad mark is received, and you need to inform your parents about it.

This canvas is very convenient for describing the fact that it is multidimensional. It is interesting to observe how the Soviet interior is arranged, reflecting the lifestyle of ordinary working people of the post-war period (Picture was painted in 1952).

This family does not live so badly: there is good furniture in the room, a carpet on the floor, a bicycle with a younger boy. Children are well dressed for those times. Apparently, the family did not lose their father during the war, and the children have everything they need to learn well. But, apparently, the older boy does not meet the expectations of his parents. He again brought an unsatisfactory grade from school.

The most important thing in the picture is the incredibly expressive figures and faces of people. The artist depicted a family that meets a walk-up losers. He did not return from school immediately, for fear of punishment.

The elder sister, undoubtedly, an excellent student and an activist, has already managed to do her homework and is now judgingly and sternly looking at her brother. He stands in the middle of the room, his eyes turned away from everyone. He is still ashamed of his own wrongdoing. But, unfortunately, it is not repeated for the first time, because the mother is tired of this behavior of her son.

Sitting on a chair, she looks at her eldest son with reproach and regret. On the one hand, in her gaze there is a desire to punish the child, and on the other you can see pity for him.

And the younger brother, who still does not know what school is, is having fun with everything that happens. And only the faithful dog is glad the arrival of the owner. He does not care what he brought in his diary.

The artist portrayed the emotions and feelings, the way of life of children of the heavy post-war period, who remember the war.