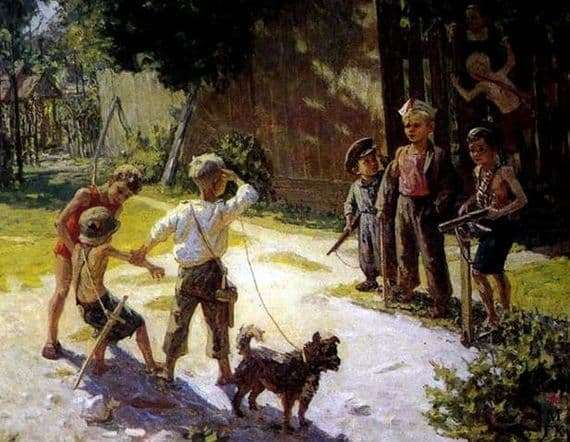 Reshetnikov – the famous Soviet artist, the famous painting of which “Again deuce” is known to everyone. During the war years he worked as a war correspondent, collected material, painted caricatures in Sevastopol.

And once I arrived on a business trip to Moscow and stopped on the street to see how the children play – ragged, dirty and probably hungry. What he saw so sunk into his soul that he soon took up the picture that opened his “children’s cycle” – he later brought fame to the artist, because he showed childhood scenes close to everyone with kindness and light irony.

“Got Tongue” shows a small war scene during a big war. While the adults are firing at each other from machine guns, digging trenches and laying mines, the children cut out wooden sabers and rifles and also begin to fight each other. To imitate adults is their usual occupation, even where they should not be imitated.

The five boys are clearly on the side of the “good”, “our”. The commander with the commandants stands arms akimbo, waiting for the captured “enemy” to be dragged toward him, two scouts are escorting the “language”. The one in the green panama instead of the helmet rests, not wanting to admit defeat. Shaggy dog ​​stands next to the owner and looks in another direction, she is clearly not interested in this war.

But the six soldiers are hard to distinguish. They are equally disheveled, equally carelessly dressed. They do not have a form that helps adults to understand their wars, whom they are shooting at, they speak the same language, and it is very clearly seen in their example that all those fighting are people. All the soldiers were such boys and nothing but a form, and do not differ in essence. And the boys are well aware that this is a game.

One of the guards sympathetically leans towards the prisoner – come on, they won’t eat you up – the commandants are a bit confused by the fact that now they have to interrogate and, maybe, even torture.

Adult war comes to the children, they play it and make it their own, scary.

A war without hate and horror is the game of war.