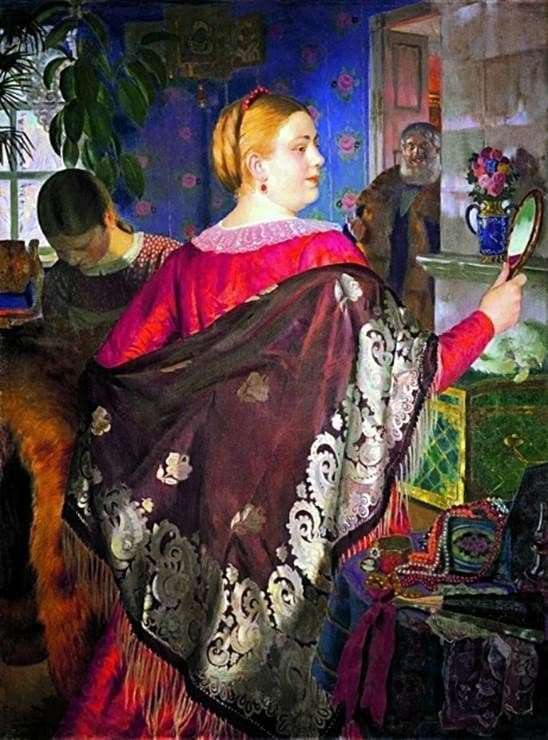 In the late works of Boris Kustodiev paintings shine with more and more life-affirming power. The riot of saturated colors, their diversity and bold play of contrasts is embodied in the work of 1920 “Merchant with a Mirror”.

In the heyday of modernity in all areas of art, this new trend also touched painting. “Merchant with a mirror” is written just in this style. This accessory of the canvas is recognized in the rich decoration of the depicted elements, in their ornamental pattern, in the abundance of so-called carpet backgrounds.

What do we see in the picture? The main character is a young woman from a bygone era, when the merchant class lived in prosperity and could swim in luxury. The girl in the lace scarlet dress tries on a new shawl, while looking in the mirror. Shawl expensive, silk, embroidered with silver patterns. The face of the merchant expresses peaceful calm, complacency and even some arrogance.

The whole life surrounding the heroine tells about the condition of the residents of the house. On the table with a purple velvet cloth laid out decorations of the hostess, a box, a fan. In the far corner a large icon gleams in gold. On the floor is a huge green chest, decorated with gold trim. On the shelf – a fresh bouquet of various flowers. Closer to the window there are large leaves of exotic plants.

In the door ajar – the figure of an admiring man. He is fascinated and proudly admires the handsome tradeswoman. Another human figure is in the shadow of a woman – an inconspicuous maid obediently sorts out the expensive fur of the hostess.

B. M. Kustodiev depicted a genre and nostalgic picture. Longing for the time of abundance and happy wealth in all expressed in the canvas of 1920. A healthy, rosy saleswoman confidently admires herself, not knowing about the upcoming elimination of the whole class.

The colorful canvas of the Russian artist is placed in the Russian Museum of St. Petersburg.