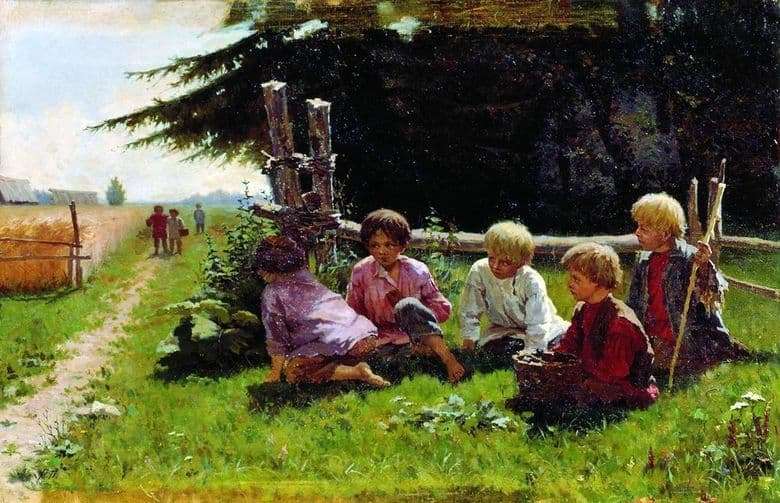 Illarion Mikhailovich Pryanishnikov is an artist of genre painting. Since 1870, the images of his paintings have become close to the direction of realism. The painting “In Ambush” is not dated, but judging by the technique of execution, it was written around 1881.

Considering the painting “In Ambush”, the image involuntarily turns into a poeticized environment, where an excerpt from the work “Peasant Children” by Nikolai Nekrasov is recalled. The writer is moved by little adventurers and sincerely expresses love for the peasant children. Hilarion Mikhailovich depicts the summer, the outskirts of the village with a country road, along which two guys are walking. One of them carries the bait thrown over his shoulder, and the other carries a bucket. Behind them is another boy, who apparently wants to go fishing with them. Boys are confident, talking about something and not knowing what to expect.

On the left is a field with golden ears. On the right is a hedge, behind which are branchy and fluffy spruce trees. Bright sunlight illuminates the road and the forest edge. Fir-trees lowered their branches and created a cool shadow, where five village boys ambushed. One of them looks out from behind a bush and reports on what he saw next to him sitting. The boys lurked and prepared for a surprise attack. Only one of the guys in a red shirt and brown vest has a thoughtful look, as if doubting the correctness of the act.

The artist clearly presents the exact socio-psychological characteristics of village children. Pryanishnikov presented to the audience all the drama and tension of the plot. Illarion Mikhailovich uses a bright and juicy range of colors that quite realistically and with color depicts the nature of a summer village.