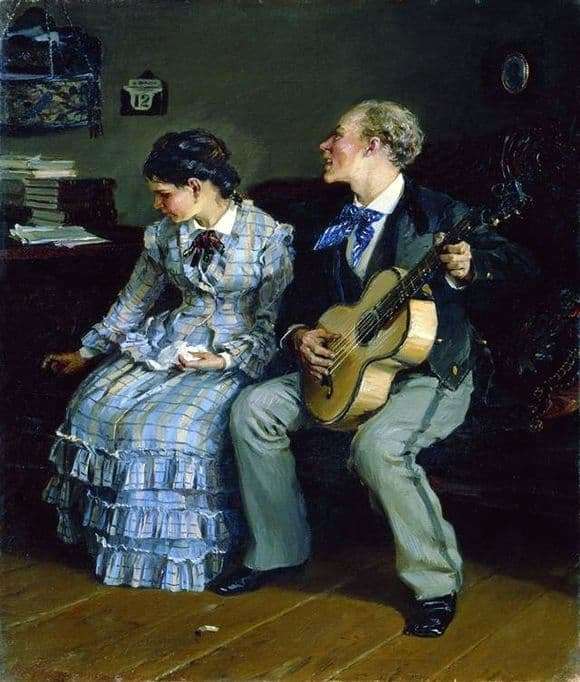 Picture Pryanishnikov “Brutal romances” written in 1881. The author again turns to the everyday genre, depicting the plot of the work as satirical. It is worth noting that the artist almost always wrote people, but not just portraits, but some events that carry a meaning, make you think about the presented situation, even dive into it.

In his works, Pryanishnikov achieves maximum naturalness, combining moments of the beautiful and classic household compositions. Each image carries a certain mood, character, a certain atmosphere.

“Cruel Romances” have not only a satirical content, but also the original author’s title. Pryanishnikov depicts a comical scene: a young guy of a rather ridiculous appearance, with curls and in a new coat, loudly singing songs while playing the guitar. The hero tries to charm the girl next door to win her heart.

The position, the emotional mood of a young man, something associated with a howling dog, provoke in the observer a sneer, a feeling of disgust, pity. The girl is clearly confused and confused by such an act, so she sits, head down and turned away from her adorer.

When looking at this canvas, many begin to compare the drawn characters with literary characters. Thus, at the mention of “The Cherry Orchard” by Anton Pavlovich Chekhov, the characters are visualized in the Pryanishnikov variant. The confusion on the girl’s face is akin to the sensations of Chekhov’s Dunyasha trying to copy some kind of nobility, depicts suspiciousness and getting ready to faint from any excitement.

Yasha, performing cruel romances under guitar accompaniment, seeks to get the maid’s location. The work fully conveys the comic and absurd behavior of young people.