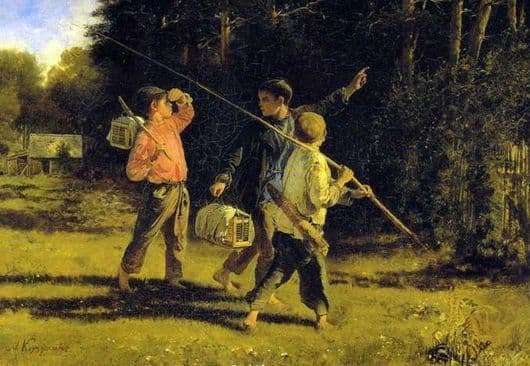 In 1887, the artist Alexey Ivanovich Korzukhin finished work on the canvas “Bird’s Enemies”. The author, who had peasant roots, depicted the morning of three peasant boys. The sun had just risen, as they immediately went on an important task – to catch birds for sale.

This occupation brings them a good income, so they treat it very responsibly. The guys gathered early in the morning and equipped themselves with all the necessary equipment. They carry cages for future prey and a long pole for catching pichugs. They are dressed in plain, plain, peasant shirts and coarse pants.

Boys go hunting barefoot, because there is no need to wear shoes in the summer, and it also saves a poor, homely budget. The guys are depicted in active poses. The eldest, their leader, points the rest to a direction where, apparently, he has found a flock of feathered victims.

The second boy fixed his gaze in the indicated direction and slightly covered his eyes with a palm from the bright rising sun, which blinded him. The third kid with a long pole carefully looks at his friends. It is evident that the boys who went into the forest are not afraid to go on such a dangerous road. They have become accustomed to such regular travels. Friends courageously stride forward in the summer foliage, heated by the scorching sun and hydrated morning dew. The artist very vividly depicted the nature of a small provincial town.

The color scheme used to convey vegetation is simply amazing. Gentle, warm lime shade attracts the eye. In the upper left corner you can see a small segment of the purple sky, illuminated by the rising sun. In general, the picture is very deep and meaningful. It is full of morning heat and comfort, the quiet peasant life of young children who are preparing to enter the cruel adult world.