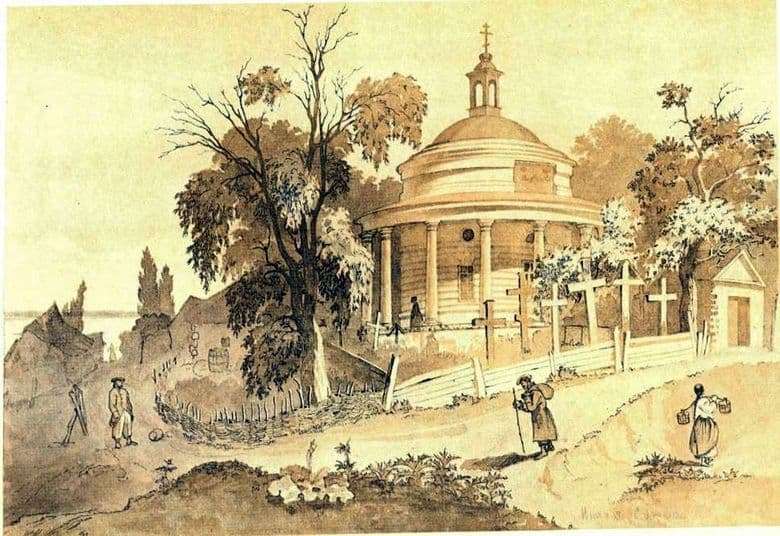 Askold’s Grave – a place shrouded in a halo of secrets and mysteries. In addition, the area is a monument of historical architecture, it is considered sacred and mystical among the locals. Taras Shevchenko dreamed of capturing on the sheet all the places of his native land, causing him warm feelings and love. Askold’s grave belongs to one of these places.

One of the main elements of the image is a large round church, painted in bright colors and built in the Empire style. In the basement of this building there is an old tomb in which the bodies of Prince Askold and his brother Dir, which were defeated by Prince Oleg, rest. Near the temple there is a cemetery in which the bodies of the Kiev aristocracy are buried.

A large tree to the left of the temple attracts its attention due to clearly traced darkened branches. The tree is considered to be holy among the locals, which is probably why the artist portrayed it as so clear and expressive. A woven fence encircles the trunk of a tree and moves away into the simple countryside, which is no longer available to the viewer.

The figures of people are also present on the canvas: for example, two men come out of the alley, a clear silhouette of a wanderer is drawn with a bag on his back and a stick, about which he leans. In the lower right corner shows a girl carrying water. For Taras Shevchenko, the image of the life of the common people became one of the main aspects of creativity.

Watercolor, which is the main material of the image, has a whole palette of shades, but in general the image is painted in soothing colors. Skillful use of light and shadow in the figure gives the image depth, space and saturation. The choice of such a delicate color palette conveys the artist’s and poet’s quivering love for the Motherland and the admiration for its beauty.