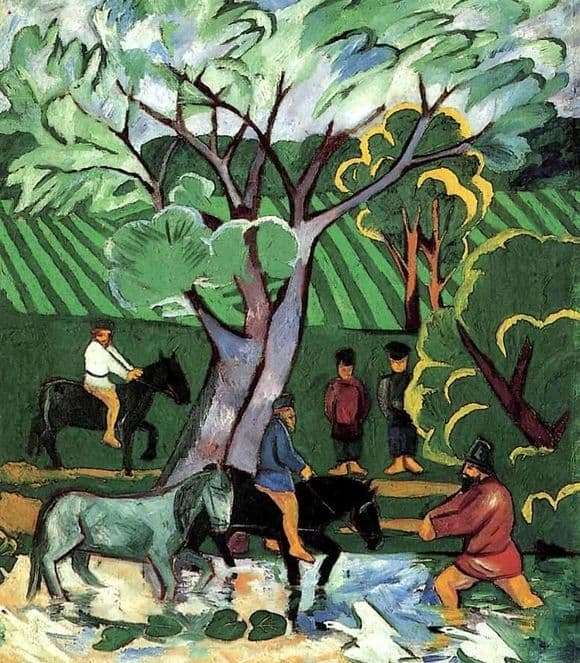 The avant-garde artist Natalia Sergeevna Goncharova, who worked at the beginning of the twentieth century, was not limited to one style in her works. She was interested in such trends as futurism and cubism. But most of her works are made in the style of neo-primitivism.

The artist was inspired by folk art, especially cheap popular paintings, Russian icon painting, as well as images of pagan gods. A distinctive feature of the work in this style was the use of color spots, devoid of volume and enclosed in a black outline.

In the painting “Bathing Horses” we see an idyllic scene from rural life. Barefoot bearded peyzane in bright shirts bathe in the piercing blue water of the fast river of their horses. A pair of horses – bay and gray already in the water, and the third, also bay suit is still on the way.

One of the men dismounted and stands knee-deep in the river, holding the horse in the lead. His actions frightened a small flock of white geese, with a cackle flying away. On the shore there are two more horseless peasants, barefoot and in caps, watching what is happening. Old trees with yellow-green foliage grow along the coast, and alternating green stripes of arable land are seen in the background.

The canvas resembles a traditional splint – the figures of people and horses are flat, although in the peasant leading the horse, you can see the muscles of the muscles under the dark-red shirt, and the outlines of the gray horse are not without grace.

Ideally parallel strips of arable land rise to the horizon, leaving the observer a small strip of gray-blue sky, however, almost hidden by spreading tree branches in the center of the picture. The white-yellow reflection of this tree, which has supplanted most of the blue from the river surface, is overlapped by a chain of lily pads.