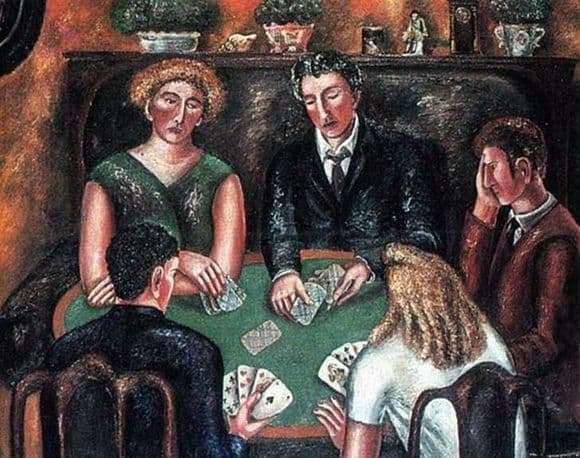 Visitors to the exhibitions of Soviet and modern artist Natalia Nesterova see her paintings as meaningful, filled with symbolism. Natalia herself responds to this, that she does not try to invest anything of the kind in her works, but simply likes to draw. And, I must say, this is what she does great. After all, then Nesterova would not be the most sought-after and expensive Russian artist.

The works of the woman painter are surreal, caricatured and extremely dynamic. A special element that is found in many of her paintings are maps. I would like to know the origins of the artist’s love for this gamble. And looking at the work of the Card in 1977, you begin to dimly guess the mood of the person who wrote it. The composition is built according to the rules of classical art.

In the center is a green card table. Behind him sit male and female figures – they are depicted with some monumentality, sharpness, rudeness, without a bit of grace. Their faces are purple, their arms are large, courageous.

The background is occupied by a bulky dark brown chest of drawers and baubles decorating the interior: a shell, a statuette, vases with fresh flowers. Everything is ordinary, at ease, smoothly and measuredly: there is a process of playing cards between two women and three men.

A man in a black jacket finishes handing out cards. The man on the right in a brown jacket is distressed by the cards he finds himself – a close feeling that once played a “fool” to a man. The viewer can see the suit in the hands of the couple, who has her back to us.

The atmosphere of the painting “Cards”, as with most of Nesterova’s works, is idleness, aimless pastime, and time for domestic relaxation. The technique of the canvas is different graphic, compositional primitivism and color depth.

Surreal, light, vague canvases of Nesterova are unusual and therefore attractive by their unique originality.