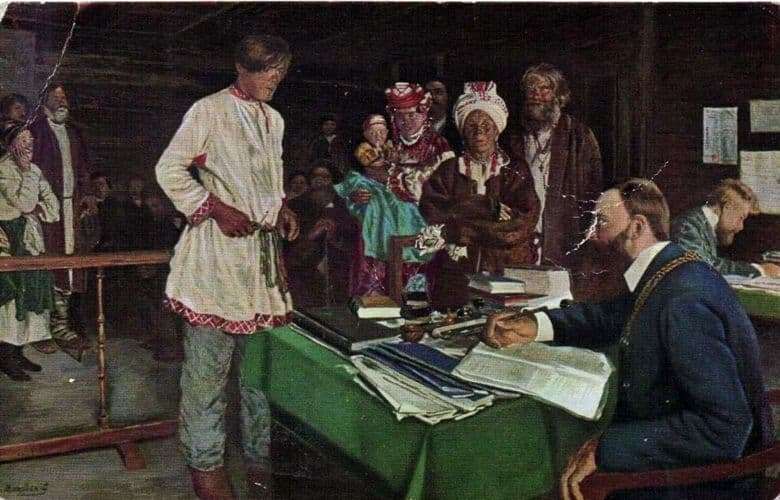 In the picture – domestic genre scene. The plot of the work is taken from life – Makovsky saw the scene of the trial during a trip to the Oryol province.

In the foreground, two – a simple peasant and a representative of the authorities, the justice of the peace.

The young man in front of the judge’s table seems to be a civil case defendant. Clothes correspond to the importance of the moment – a clean, obviously front dress, a white shirt, boots (in everyday life the peasants wore other shoes, or did without them at all). The pose expresses excitement and attention – the guy with both hands holds on a shirt belt, the head is a little inclined to the judge.

His family came to the magistrate with the guy – an elderly couple (most likely the respondent’s parents) and a young woman with a baby in their hands stood in the waiting room on the right side of the picture.

The family has a close group located at a respectful distance from the table.

In the background of the canvas is a pending group of people. Perhaps these are relatives or neighbors who came to support the defendant.

The Justice of the Peace is expressively depicted. The respectable middle-aged gentleman is dressed in a strict suit – the civil service obliges. Judging by the numerous documents on the table in front of the judge, he takes his work seriously: he listens attentively to the respondent, asks questions on the merits, is interested in circumstances. The table is covered with green cloth, traditional for office places, the legal literature is stacked on the table in a neat stack.

The justice of the peace in the image of the author is a representative of the Russian intelligentsia who sympathize with the plight of the peasants.

On the right side of the picture, another serviceman is depicted near the door – probably a legal assistant. He is completely absorbed in work – he is not distracted by what is happening around him, he is working on another petition.

Cloth stops the view, I want to consider it in detail, slowly looking at every little thing, wondering about the options for ending the case study.