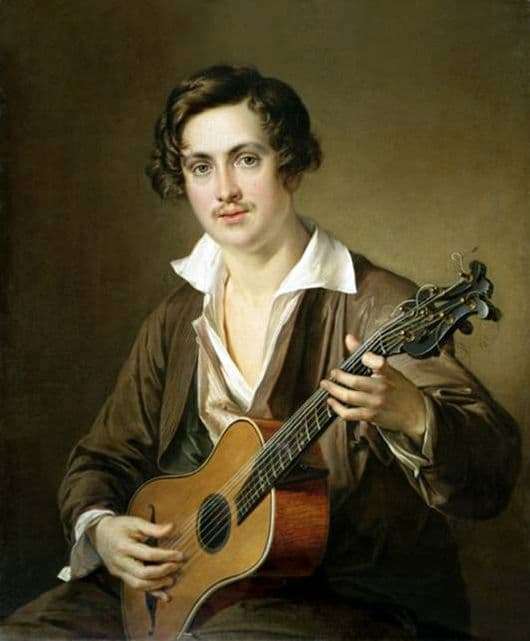 Vasily Tropinin was engaged in writing portraits in various genres, which could be completely different from each other. But most of his contemporaries and connoisseurs of his work most liked portraits in which the author portrays the image of a guitarist. About one of these paintings and will be discussed.

In the picture we see a young guy, 18-20 years old, with a snow-white, but slightly ruddy on his cheeks, skin, wavy hair and a neat mustache. Putting a simple chord, he stumbles on a light motive. From the position of his head, one can assume that during the game he was distracted from the instrument for a few seconds to look at the listener. This guy is most likely from a noble family, as we can guess from his facial features, delicate fingers and his clothes.

Not surprisingly, by the way, the guitar player is wearing a robe, which we can see in many of Tropinin’s paintings. He casually draped over a casually undone shirt on the upper buttons and cuffs. Such clothing expresses the unhurried and measured Moscow life, as well as the ease and freedom of thought that are inherent in this person. It is worth paying attention to the tool. A guitar, skillfully made, whose pegs are gilded, and the deck and sides are made of solid wood, most likely costs quite a lot, which once again confirms the social status of the musician in the picture.

Pictures with the image of a guitarist extremely liked not only the public, but also the author himself. For this reason, in different years he wrote a large number of portraits, similar to the one described above. Apparently, it depicts Count Morkov in his youth. “Guitarist in the shirt” is another name for Tropinin’s painting “Guitarist”. There is something in this image that has always caused and causes pleasant associations: perhaps the guitar, which was just gaining popularity in those years, and perhaps the style and style of writing the picture, which depict a simple and understandable plot without frills and excesses.