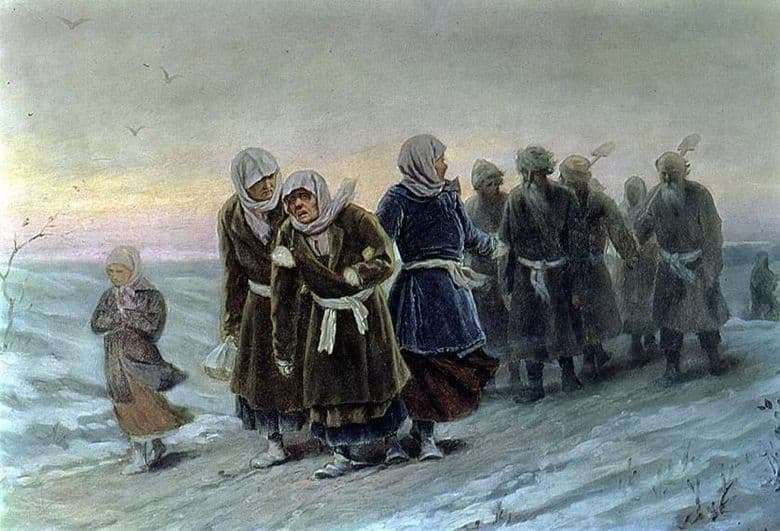 In 1880, Vasily Perov wrote the painting “The Return of Peasants from a Funeral in Winter”. It was a turning point in the work of the artist who decided to reflect the everyday life of ordinary peasants in his works. It would seem that this topic for work is boring and unremarkable, but Perov was able to very accurately convey to us with the help of canvas and oil all the emotions and problems of the poor of that time.

The painting “The Return of Peasants from the Funeral in Winter” is endowed with the special features of the grief and grief of ordinary people, whose fate has already been predetermined without the right to change. To impart a deep tragedy, the author depicts a string of people walking from the cemetery to a winter blizzard. There is nothing around, everything is covered with snow, only emptiness and terrible cold.

It is in the pictures with the image of the funeral that Vasily Perov chooses a snowy winter for the landscape, when everything seemed to freeze and the sky was covered with gray, heavy clouds.
In the foreground of the picture we see people coming from the funeral. Their faces are open to us. The author, therefore, wants to show the whole range of feelings, heartbroken people. A special role is played by an elderly woman who is led by the arms, because she cannot cope with her body.

Looking into the face of a peasant woman, one can immediately understand that the funeral for her turned out to be a great ordeal which she could not survive. The facial expressions of the rest of the funeral participants are endowed with feelings of complete hopelessness and the realization that their life is just a meaningless existence. In the background of the canvas, we see older men with shovels. They also walk silently with a bowed head, accepting all the bitterness and ordinariness of death, which is also inevitable for each of them.
In his painting The Return of Peasants from a Funeral in Winter, Vasily Perov very accurately conveys the quiet grief of the poor who are accustomed to unhappiness in their lives.