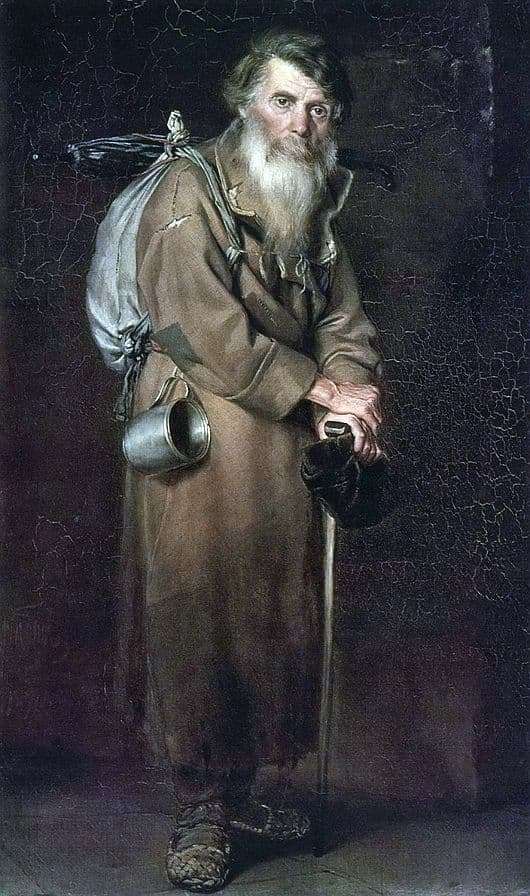 The painting was created by Perov in 1870. The artwork “The Wanderer” is the first touch of this topic. The picture was of great personal importance to his master. Perov wrote an image of a man whom he wanted to help, and when he refused and preferred a beggarly life, he was very offended by it.

In creating the image of the wanderer Perov repelled from the Christian theme. His hero is not ashamed of a beggarly existence and retains a sense of dignity. The old man is rather well-groomed, although he wears worn clothes. The person depicted in the picture shows practicality. He has everything necessary for traveling with him – a bag, a tin mug, an umbrella. The stranger pierces his gaze, filled with wisdom and life experience. The hero looks at us from the canvas rather sternly.

When creating the work, Perov relied on his idea of ​​wandering, while creating high morality in it. It seems as if the hero is calling us to appeal to his conscience.

The author placed the figure of the elder in a dark space with the absence of light sources. But, despite this, the light is still present in the work. It seems that the light comes from the wanderer himself. Perov added glares of light to a gray beard and dark hair, a wrinkled forehead, sunken cheeks, illuminating the entire camp of the hero with some kind of internal glow. There is not even a hint of reflections in the background of the picture. The space around the old man does not accept the light coming from him, creating a contrast in the play of darkness and light on the canvas.

Perov focused on the relief of the plane. He lifted the collar, made the folds of clothes sharp, and the volume drops sharp. Thanks to these techniques, the gaze constantly stops on separate parts and does not slide along the canvas evenly.

Perov shows us wandering not as a vagrancy, but as a way of life of a person.