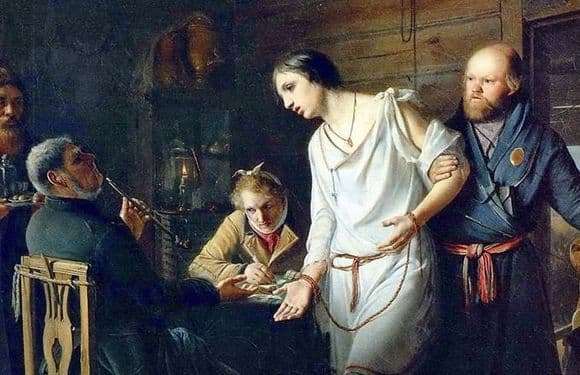 Far from everyone thought about which of the Russian artists is still popular today? Whose works are discussed most of all because they reflect the hopelessness, hopelessness and infamy of today’s Russian life?

We are talking about a Russian artist named Vasily Perov. It was in his work that the depression, the life and the attitudes of some classes to others during the artist’s life are transmitted to the maximum.

These include the painting “The arrival of the camp.” This picture was completed and presented to the public in the distant 1857. The style that its author used during creation was realism.

Throughout his life, right up to moving to another country, to France, Perov tried to learn and was a great man. Moreover, he did not fight the regime and that injustice in Russia, which surrounded him throughout his life. However, after he went to Paris and came back, he realized how complex and illogical life is in his home country. But he couldn’t do anything, therefore he tried to throw out all his pain, bitterness and discontent through his paintings.

One of the works of art – Arrival of the camp. In its concept, it is similar to all the other works of Perov. It clearly shows the injustice and the difference between several classes. One side is serving, the other side is doing everything to ensure that this courtesy is submissive and boundless. In every movement of the picture, the reproach of the abominations and vileness of being of that time and modernity is visible.