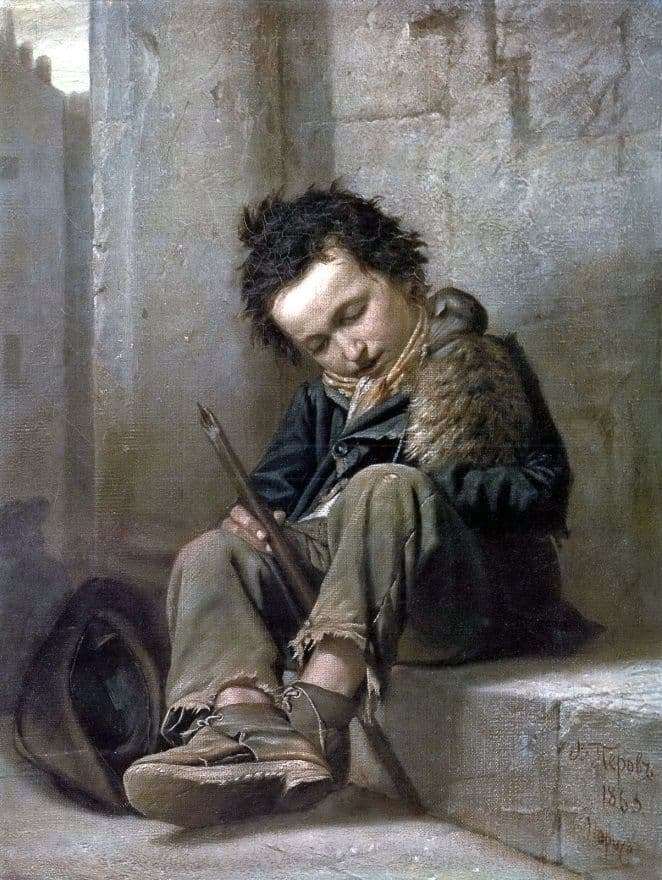 The picture was painted during a trip to Europe by Vasily Grigorievich. For a long time the artist could not find inspiration, choose a suitable plot for his new work. He searched for him in his usual images: he looked at scenes of street life, studied the characters of city dwellers, street performers and actors. His attention was attracted by a boy, a flutist, speaking to the public with his instrument and a handy marmot. The expressive appearance of the trampling child was the impetus for starting work on the work.

The canvas depicted life itself, in all its unsightly truth: a small boy for his age, emaciated and haggard with an adult, wise face of an old man. On his forehead, which did not become clear even at the moment of rest, one can read the story of a difficult fate. With a special diligence, a tramp’s outfit was written out, consisting of dangling panties, an old, not in size, frock coat, worn-out shoes and an unexpectedly almost dappled neck scarf. In the hands of the Savoyard the flute, next to him is the hat in which he collects his modest fees. On the shoulder of the boy, his faithful companion perched, the only living creature that shares his disadvantaged life.

Serov paid particular attention to the details that create the entire depth of the tragic image of the little beggar artist. The hat for collecting coins is empty, which means that today the boy will not be able to feed himself and his assistant. Against the background of impregnable stone walls, solid gray and cold, the child’s figure looks especially vulnerable and touching. The whole background, which depicts a street musician with his uncomplicated belongings, only emphasizes the child’s vulnerability and the indifference of the big world to the fate of the little ones.