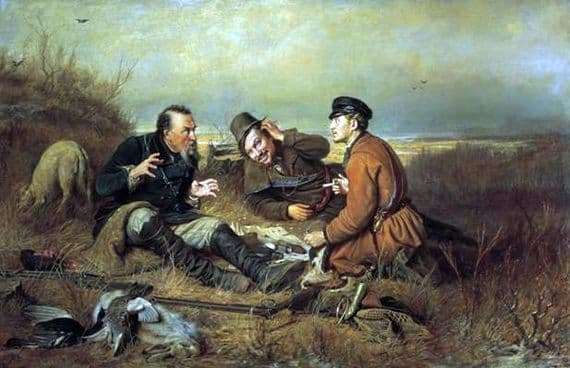 This artist is known to many, especially for the pictures of “hunting” subjects. “Fisherman”, “Birdies”, “Dovecot” – the names speak for themselves. Being a passionate hunter himself, Perov knew firsthand all the realities of her life.

The painting “Hunters on a halt” is one of the most famous variations of the artist on the theme of hunting.

On a canvas the size of 119×183 cm, there are three hunters. Judging by the trophies drawn in the lower left corner of the picture, the heroes’ hunt was successful, and they decided to take a halt.

The background is sad and a bit gloomy – faded grass and dark sky with lead clouds. Obviously late autumn.

The main focus on the picture is a bright light, which is concentrated on the faces and hands of the hunters. An old and experienced hunter is enthusiastically and emotionally telling his two companions, most likely, about his past hunting adventures. The young man on the right attentively and with obvious interest listens attentively to each word of a more experienced comrade, a middle-aged man, who, next to an elderly hunter, listens half-heartedly and with apparent skepticism.

The picture depicts the usual life scene from the life of every average man of that time. But not everything is as simple as it seems at first glance.

Behind the usual life situation from the picture of Perov lies a deep philosophical meaning. Collision on the same plane of the canvas of old age, youth and maturity. Old age is an allegory with an elderly hunter, lives with memories and idealizes the past, youth is a young hunter, enthusiastically literally believes in word and maturity – a middle-aged hunter who doesn’t perceive anything just like that, but relies only on his life experience. The painting “Hunters at Rest” is unusual in that all the characters depicted on it have real prototypes. The artist’s friends are doctors and, by the way, also avid hunters – DP. Kuvshinnikov, V. V. Bessonov and N. M. Nagornov.