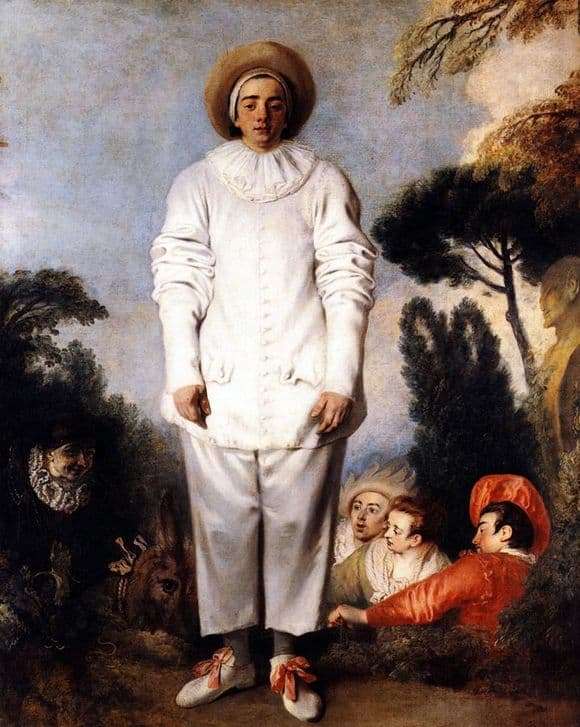 Antoine Vatto – the largest French painter, a kind of Rococo prophet, who preferred the mythical and plot scenes. He also paid a lot of attention to actors in their traditional roles. His paintings are usually made with great art and attention to detail, loaded with meaning, and characters, and trifles that make up the interiors.

Gilles in France is called everyone familiar Pierrot, who was born in Italy, being the mask of the comedy del arte. Initially, his role was the role of another servant, the eternal rival of Harlequin, a small, cunning and resourceful, deftly masking it with external good-naturedness and clumsiness.

However, all his plans often failed and failed, Columbine went to Harlequin, and once the image of Pierrot was rethought. From the comic, he became a tragic character, gradually transforming from a rascal into a persecuted unfortunate lover.

In the painting, Watteau Pierrot appears in this image. Despite the presence of people around him, he is alone. The performance is over, everyone is busy with their own affairs, and he stands on a hillock with a kind of confused and uncomprehending.

The lowered line of the horizon elevates it above the rest, turning the picture into a portrait and indicating how different the level of thinking and interests of his colleagues are. They are indifferent to Pierrot, they are occupied by conversations, and in his life their role is no more than the role of a statue of a faun looking seriously and stupidly. He is wearing his traditional costume. Pointed hat, shifted to the back of the head, has a vague resemblance to a halo.

Playing the tragic and misunderstood character, Piero remains in his life the same, unnecessary to anyone, rejected by everyone and not understanding anyone.

He looks at the viewer sadly and as if pleadingly, as if assuming that it is in the power of those who look at him to rid him of this deadly longing.