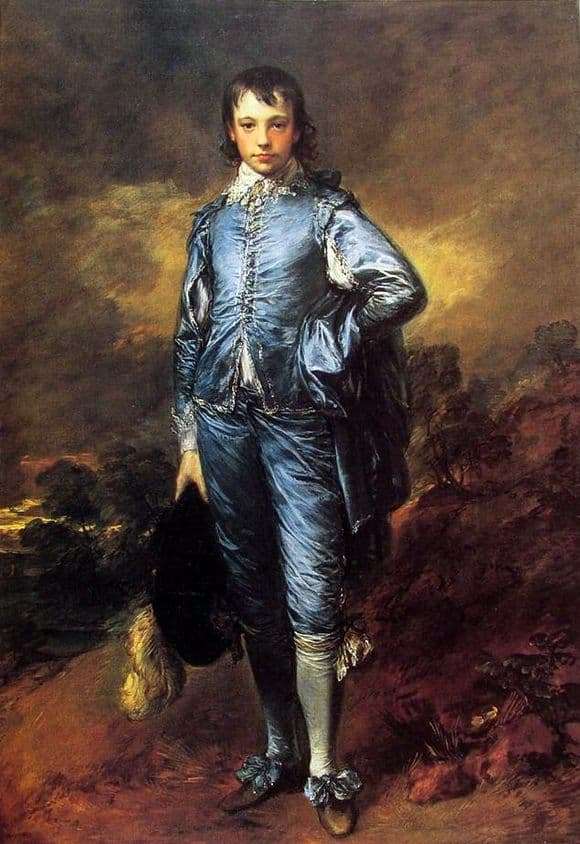 The painting “Blue Boy” is one of the most widely recognized works of Thomas Gainsborough. The artist created his own special style and style of writing a portrait. Paying particular attention to the models, he used the surrounding nature to convey their mood and character.

In addition to the important role of the landscape in the composition, T. Gainsborough used cold colors not typical of traditional canons. It is curious that the latter even caused controversy between him and his contemporary Joshua Reynolds, who believed that warm colors based on brown and red should be used as the basis for writing portraits.

Gainsborough did not seek to engage in controversy with his opponent; writing a portrait of “Blue Boy” in exquisite silver-blue and gray colors, he, thus, denied the opponent’s arguments.

Jonathan Battle, who became the prototype of the image, was the son of a wealthy iron and hardware merchant. The boy was not an aristocrat, but the artist with a premeditated intention dressed him in a luxurious and elegant suit. First, the portrait was painted in 1770, when in Britain it was fashionable to pose in costumes of the 18th century. The second reason was the attention-grabbing expression of independence and significance on the face of a young man.

Clothing only enhances this superior effect. T. Gainsborough sought to capture just such a phenomenon, arguing that the nobility is inherent not only because of the origin of man, but the nature of the person. The pose is at the same time too simple and as if full of challenge, the result of which is hectic, darkening, as before a thunderstorm, the sky behind the figure. The boy stands firmly and confidently, his gaze is directed at you and, piercing, rushes further beyond the horizon. He is here, illuminated by light and iridescent, like topaz, with silver and pure heavenly color, radiating recklessness and grace. And the next second, he will disappear, like a vision, waving his hat.

The picture is filled with grace, warmth and ease, being one of the favorites for the artist himself. By the way, during his work, Thomas Gainsborough became a good friend of Joshua Reynolds, who later remained a devoted admirer of his work and collected his work. By the way, there is a later version of this picture – “Pink Boy” or “Young Nikola”. It was written in 1782, but did not receive the same fame and unfamiliar to the general public.