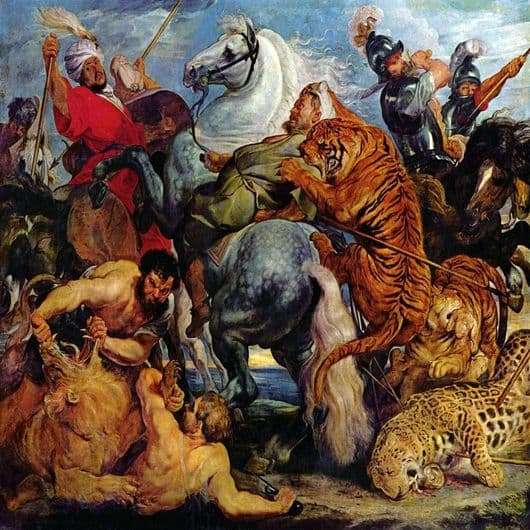 By the time of writing this picture Rubens was already a famous artist. He lacked the role of only the court portrait painter. Rubens had a desire to create something monumental, dynamic. As a result, he became the first to portray animals and people in such difficult poses. The painting “The Hunt for Tigers and Lions” is dedicated to the hunt for wild, exotic animals for Europe.

The artist goes beyond the real story. The viewer appears implausible plot. In a single battle, a lion, a leopard, tigers, horsemen of different nations are gathered. In the picture there is a hero similar to Samson, tearing the lion’s mouth. Hunting is more like a battlefield. Everything that happens is woven into one tangle. A real drama is being played out. The tigress is trying to save her cub, carrying him in the mouth. Near it two more tiger cubs climb. The leopard is killed: a couple of copies and several arrows were thrust at him. In the center of the plot is an enraged tiger, who pounced on the rider and clutched at his shoulder.

In the eyes of a man, all the horror and pain is visible. He did not even have time to pull out his dagger to protect against a predator. His horse reared up from fear and was about to throw off his rider. Knights in heavy armor rush to the rescue. Their swords are ready. In the left corner a lion brought down one hunter. But after a moment the predator himself became a victim. A man who looks like Samson breaks his mouth, straining all his muscles. There is a real fight in the struggle for survival. In the background, other hunters raised their spears, threatening the beast, which is not visible to the audience.

The poses of animals and people in this picture are unusual and difficult for that time. In this Rubens was an innovator. It is possible that in the picture the artist repeated the plot of their unfinished fresco by Leonardo da Vinci “