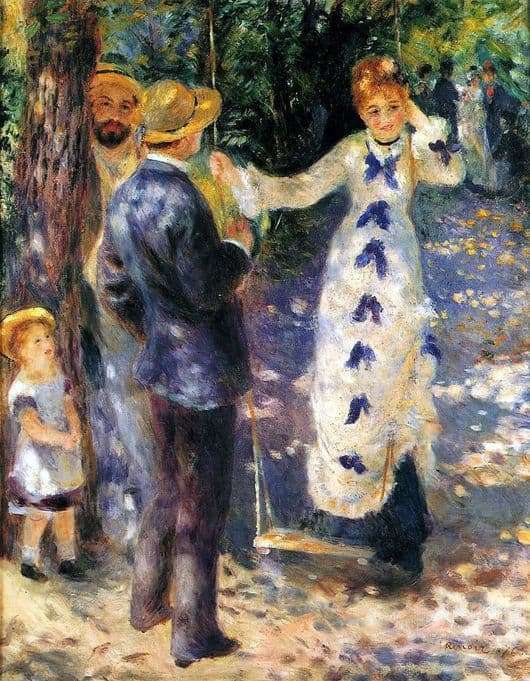 In 1877, the canvas was presented at the 3rd exhibition of the Impressionists. From the same year, the painting found its place in the collection of Gustave Caibotte. He was a Marshal of France, as well as an artist. After Gustave died the picture was the property of the state. Since 1894, the canvas was given to the Museum in the Luxembourg Garden. The picture got to the Louvre only in 1929. In the gallery of Zhe-de-Pom “Swings” were exhibited since 1947. From 1986 to the present day the work of art is in the Orsay Museum.

As you know, the favorite model of Renaura was Margarita Legrand. It is assumed that it was she who posed for the master for the famous work “Swing”. On the canvas depicts a beautiful young lady who stands on a swing, while she wraps the rope with her hands so as not to fall. She is dressed in a white with a blue dress with flirty bows.

The face to the woman, and to the viewer the back is a man. Apparently, they are talking about something. The young man is wearing a blue jacket and a straw hat. Behind them in the background a lively conversation leads a group of people walking.

On the left side of the canvas is another man peeking out from behind a tree. And next to him is a little blond girl. Who with genuine delight contemplates the charming lady riding on a swing. The pure look of the child gives a certain charm to the plot.

Renoir did not stint on the bright colors and generously endowed them with the canvas. The picture is made in blue, green and white wines. Through the crowns of trees, the sun’s rays are breaking through, adding to the story liveliness. They are reflected in the figures, on their hats and clothes.