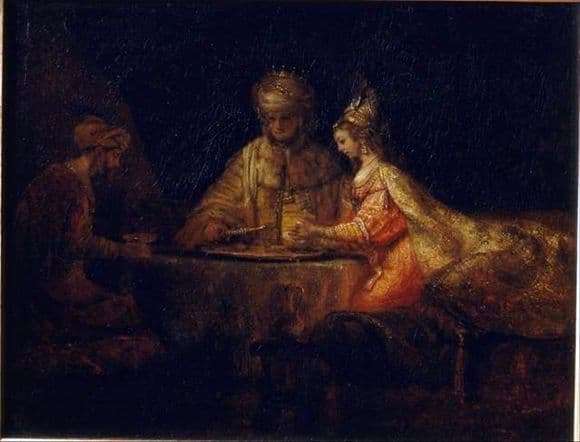 The painting Artaxerxes, Haman and Esther is one of the most famous paintings of the seventeenth century. The painting was painted in the early 1660. For so many years the picture was more than once from destruction. She was in a fire, she was kept in the basement, because of this, she became dull, and her color has lost its original features.

The picture was restored more than four times, and, despite all the failures, it is now quietly wounded in the Pushkin State Museum of Fine Arts.

Many experts believe that Rembrandt was inspired by the play “Esther”, dedicated to the family of Hinlopen.

The painting depicts three people, and as it is not difficult to guess, this is Artaxerxes, Esther and Haman. These characters were taken from the Book of Esther, and the scene tells about the feast of Artexerx and his wife Esther, to which their enemy, Haman, was invited.

In the center of the picture, Artaxerxes itself sits in the brightest place. He is dressed in gold clothes, with a crown on his head. On the right is his wife, Esther. Her outfit is not inferior alongside the king. She is wearing a gilded dress and a raincoat that is incredibly long. Her dress is decorated with stones, necklace is visible on the neck. Her hair is blond, and on her head a crown that looks even richer than that of Artaxerxes. Well, and on the left, Haman sits in the shadow His clothes look simpler. She is brown with a turban on her head.

Haman’s face with a beard, his gaze lowered. The faces of all the characters are poorly visible, because the picture is a bit blurred. We can only see clearly Esther. Her thin eyebrows, half-closed eyes are visible. One can see her cheekbones and nose and ears.

The heroes seemed frozen, and the artist managed to portray them on his canvas. From the lips of the heroes, it seems as if the remarks are still being broken. You can even imagine what happened a minute before this moment, and also what will happen next. It is such realism and inherent in the paintings of Rembrandt.