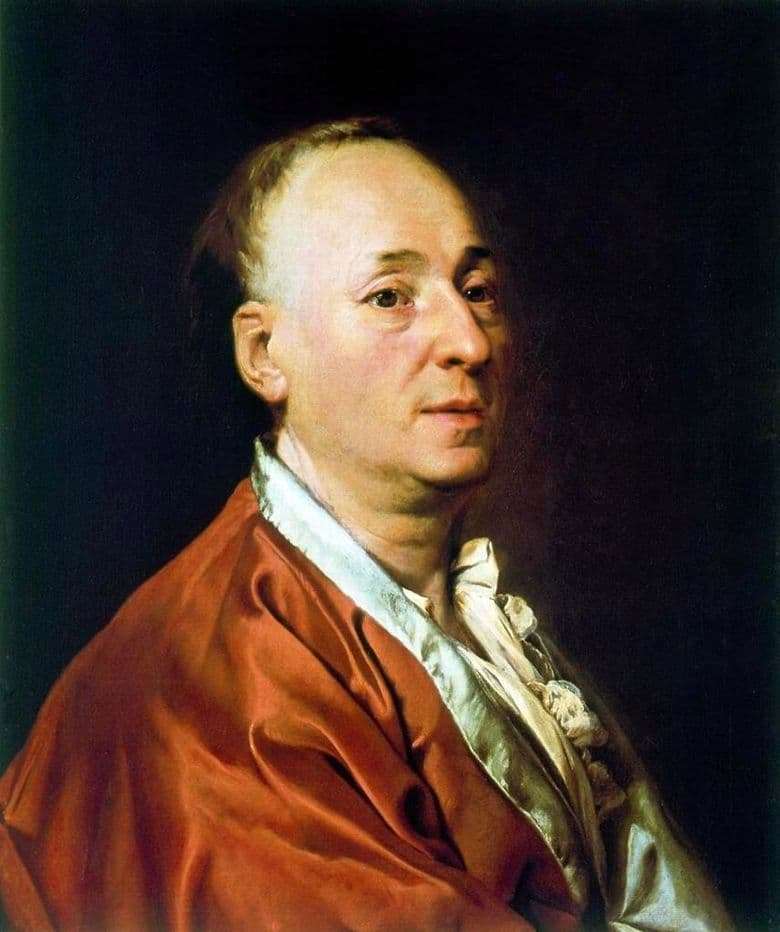 The portrait of the great French philosopher belongs to the artist’s earliest experiences in this field. Didro is considered to be an outstanding art theorist, well versed in it. The thinker was skeptical of his own portraits, believing that his face mystifies portrait painters due to its variability. However, the picture Levitsky made a favorable impression on him, he took it with him to his homeland.

Levitsky sensitively caught the variability of this extraordinary guise. He painted the face of an intellectual in close-up, without embellishing weaknesses and imperfections. Swelling under the eyes, double chin, bald patches are noticeable. Nothing distracts the attention of the audience; the philosopher sits in a calm pose on a dark background and looks like an ordinary portrait in the portrait.

Levitsky portrayed him simply, without ceremony, in a home satin robe, in a white shirt unbuttoned, without a wig inevitable in those years. Behind Diderot’s completely simple appearance lies a deep mind and serious character. The close-up portrait stands out with a high forehead, eyes glowing with intelligence, an imposing nose, a prominent chin, and his entire mobile face. It can be seen that Diderot indulges in intense reflection, his detached gaze is fixed in space and concentrated on some important thought.

Despite the fact that the chamber portrait was the initial experience of the artist, the color of the canvas is striking in its elegance. The warm ocher tones of the clothes soften the severity of Diderot, the texture of the material is carefully written out: the atlas is poured quite naturally. All details, each fold of a dressing gown and a snow-white shirt are emphasized with a skill worthy of talent. On the face, deep serious dark brown eyes stand out with vividness and brilliance, benevolently looking at the world. Levitsky managed to catch and convey the most important thing in the character and appearance of the great thinker. The portrait reproduces the respect of the painter to the personality of the great French enlightener.