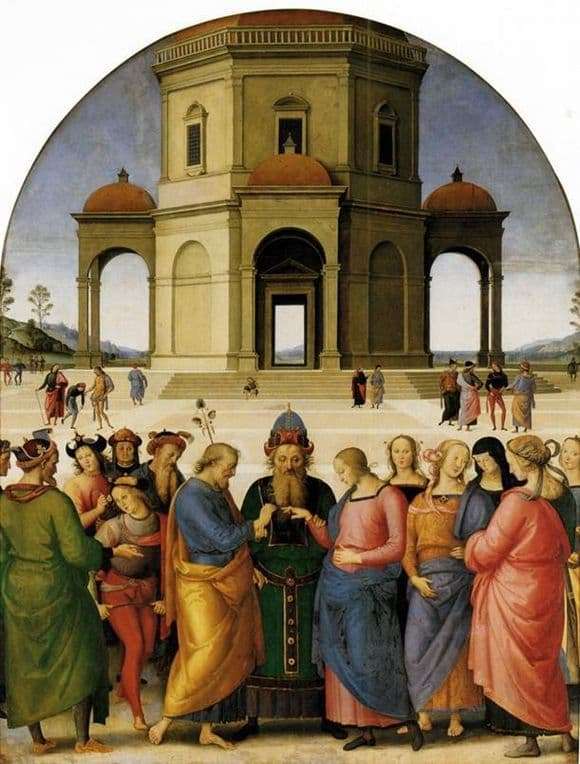 The plot of this picture is the biblical legend of how the Virgin Mary was betrothed to the carpenter Joseph. It was painted by the talented artist Pietro Perugino in 1504 specifically for the Cathedral.

According to the Golden Legend describing the lives of holy people, Mary was a pupil of the Jerusalem temple. After the girl reached the age of majority, the priests were supposed to marry her to a decent and virtuous man.

To find a suitable challenger, they placed their hopes on a sign from above. All men who wanted to marry Mary had to leave their staffs in the temple for the night. Whose staff blooms – he will become her husband. At the behest of the heavens, only on the staff left by Joseph, the leaves blossomed.

On the canvas “The Betrothal of Mary,” the painter depicted the marriage scene. The clothes of the clergyman are reproduced from the Old Testament descriptions. He holds the hands

of the newlyweds at the moment when Joseph puts the wedding ring on Mary’s finger. She already wears a future Savior under her heart. The legs of Joseph are barefoot. On his left shoulder lies a blooming staff, as a symbol of the accomplishment of divine will.

Along the edges of the picture is a group of people. Men are unlucky candidates for Maria’s hand, and women are her friends. In the background is a spacious area, paved with stone.

Its very center is the Jerusalem temple. The picture is striking in its grandeur. Bulky domes, high arches, beautiful steps – all these are techniques of ancient architecture. On both sides it is surrounded by a blue sky and soft lines of green hills characteristic of that area.

Perugino’s painting is built on contrasts and symmetry. Strict straight lines are combined with rounded shapes, but the characters look lively and natural. The delicate color palette and superb re-creation of every detail makes the picture the personification of the divine power that lives on Earth in everything.