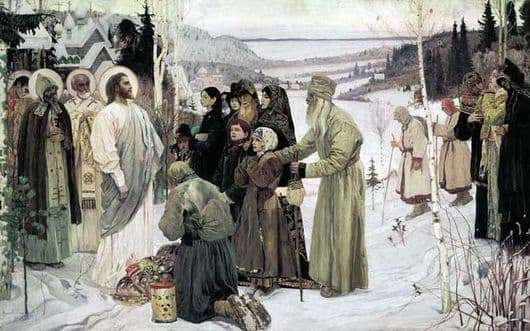 The spring of 1902 was marked for the artist Mikhail Nesterov by a public review of his painting “Holy Russia”. Here he wanted to apply the iconographic look of his spiritual practice.

The basis of the plot are the words from the Bible. The picture shows the winter landscape. The action takes place in Solovki. Sketches written by the artist, taken from these places. The image of Christ, who was surrounded by the most honored saints in Russia. They resemble the faces of old icons, which depict: Nicholas the Wonderworker, St. Sergius of Radonezh, St. George the Victorious.

Saint Nesterov depicted on the left and on the right the people who came to Christ and his helpers to repent and tell him about their troubles. His favorite characters: wanderers, monks, girls, children, he wrote from real faces. There is even a sister and his mother. He portrayed them supporting the sick girl.

The picture symbolizes the original Orthodox faith. Only in this way can people of different times come together and be saved. The work tells about the times when Christianity was just beginning to emerge.

Therefore, the temple here shows the whole earth, in the snow decoration of forests and fields, and not the gilded church. Critics attacked the artist with great fury. They crushed the contents of the picture to the nines.

According to them, in the picture the image of Christ and the saints bear the complete discrepancy of the official church. Since Christ is depicted in the image of an ordinary person.

Even, according to Leo Tolstoy, the image of Christ is similar to the Italian tenor. The picture was considered non-sound and unsuccessful. In the picture, the artist managed to capture his feelings about the policies of those times in Russia.

The whole picture is permeated with motives of repentance. And it was not by chance that in 1905 Nesterov became a member of the Union of the Russian People.